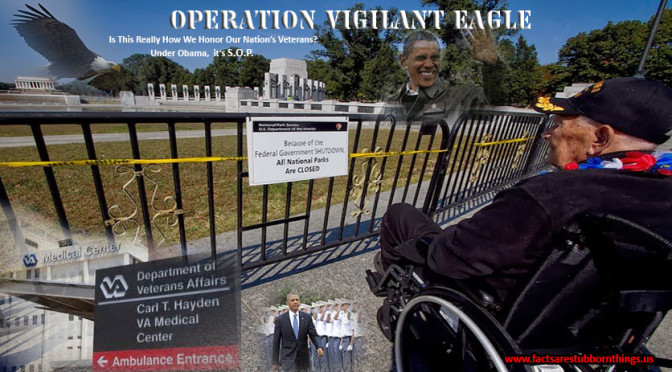 IS This Really How We Honor Our Nation’s Veterans?

“Making matters worse, thanks to Operation Vigilant Eagle, a program launched by the Department of Homeland Security in 2009, military veterans returning from Iraq and Afghanistan are also being characterized as extremists and potential domestic terrorist threats because they may be “disgruntled, disillusioned or suffering from the psychological effects of war.” As a result, these servicemen and women—many of whom are decorated—are finding themselves under surveillance, threatened with incarceration or involuntary commitment, or arrested, all for daring to voice their concerns about the alarming state of our union and the erosion of our freedoms.

An important point to consider, however, is that the government is not merely targeting individuals who are voicing their discontent so much as it is locking up individuals trained in military warfare who are voicing feelings of discontent. Under the guise of mental health treatment and with the complicity of government psychiatrists and law enforcement officials, these veterans are increasingly being portrayed as ticking time bombs in need of intervention. In 2012, for instance, the Justice Department launched a pilot program aimed at training SWAT teams to deal with confrontations involving highly trained and often heavily armed combat veterans.

In the four years since the start of Operation Vigilant Eagle, the government has steadily ramped up its campaign to “silence” dissidents, especially those with military backgrounds. Coupled with the DHS’ dual reports on Rightwing and Leftwing “Extremism,” which broadly define extremists as individuals and groups “that are mainly antigovernment, rejecting federal authority in favor of state or local authority, or rejecting government authority entirely,” these tactics have boded ill for anyone seen as opposing the government.

One particularly troubling mental health label being applied to veterans and others who challenge the status quo is “oppositional defiance disorder” (ODD). As journalist Anthony Martin explains, an ODD diagnosis

“denotes that the person exhibits ‘symptoms’ such as the questioning of authority, the refusal to follow directions, stubbornness, the unwillingness to go along with the crowd, and the practice of disobeying or ignoring orders. Persons may also receive such a label if they are considered free thinkers, nonconformists, or individuals who are suspicious of large, centralized government… At one time the accepted protocol among mental health professionals was to reserve the diagnosis of oppositional defiance disorder for children or adolescents who exhibited uncontrollable defiance toward their parents and teachers.” https://www.rutherford.org/publications_resources/john_whiteheads_commentary/operation_vigilant_eagle_is_this_really_how_we_honor_our_nations_veterans

“Timothy McVeigh’s recent conviction for the Oklahoma City bombing is the event hailed as closure for the family of victims who died in that attack. It should, instead, be a reminder of the unconstitutional Omnibus Counterterrorism Act of 1995 that was drafted by the Clinton administration and passed by Congress one year after the bombing.

Clinton’s Omnibus Counterterrorism Bill was introduced into Congress in February of 1995. The bill was a death knell to the Bill of Rights and was designed to grant sweeping powers to the executive branch. Included in the bill’s provisions was a much broader wiretapping authority for law enforcement with less judicial oversight, access to personal and financial records without a warrant. Most of all included in the bill are sweeping powers granted to the President to designate certain groups as “terrorist” organizations, to seize the assets of said groups and their supporters, and to imprison U.S citizens and deport aliens supporting such groups, aliens being denied due process under the law. http://www.apfn.org/thewinds/1997/06/terrorism.html

(2009)  The Federal Bureau of Investigation earlier this year launched a nationwide operation targeting white supremacists and “militia/sovereign-citizen extremist groups,” including a focus on veterans from Iraq and Afghanistan, according to memos sent from bureau headquarters to field offices. The initiative, dubbed Operation Vigilant Eagle, was outlined in February, two months before a memo giving a similar warning was issued on April 7 by the Department of Homeland Security.

Disclosure of the DHS memo this week has sparked controversy among some conservatives and veterans groups. Appearing on television talk shows Thursday, Homeland Security Secretary Janet Napolitano defended the assessment, but apologized to veterans who saw it as an accusation.

“This is an assessment of things just to be wary of, not to infringe on constitutional rights, certainly not to malign our veterans,” she said on NBC’s Today Show.

The documents outlining Operation Vigilant Eagle cite a surge in activity by such groups. The memos say the FBI’s focus on veterans began as far back as December, during the final weeks of the Bush administration, when the bureau’s domestic counterterrorism division formed a special joint working group with the Defense Department.

The FBI said in the memo that its conclusion about a surge in such activities was based on confidential sources, undercover operations, reporting from other law-enforcement agencies and publicly available information. The memo said the main goal of the multipronged operation was to get a better handle on “the scope of this emerging threat.” The operation also seeks to identify gaps in intelligence efforts surrounding these groups and their leaders.

The aim of the FBI’s effort with the Defense Department, which was rolled into the Vigilant Eagle program, is to “share information regarding Iraqi and Afghanistan war veterans whose involvement in white supremacy and/or militia sovereign citizen extremist groups poses a domestic terrorism threat,” according to the Feb. 23 FBI memo.” http://online.wsj.com/news/articles/SB123992665198727459?mg=reno64-wsj&url=http%3A%2F%2Fonline.wsj.com%2Farticle%2FSB123992665198727459.html

Obama admin. knew about WWII veterans’ request and rejected it

At least 40 U.S. veterans died waiting for appointments at the Phoenix Veterans Affairs Health Care system, many of whom were placed on a secret waiting list. The secret list was part of an elaborate scheme designed by Veterans Affairs managers in Phoenix who were trying to hide that 1,400 to 1,600 sick veterans were forced to wait months to see a doctor, according to a recently retired top VA doctor and several high-level sources.For six months, CNN has been reporting on extended delays in health care appointments suffered by veterans across the country and who died while waiting for appointments and care. But the new revelations about the Phoenix VA are perhaps the most disturbing and striking to come to light thus far.

Internal e-mails obtained by CNN show that top management at the VA hospital in Arizona knew about the practice and even defended it.

Dr. Sam Foote just retired after spending 24 years with the VA system in Phoenix. The veteran doctor told CNN in an exclusive interview that the Phoenix VA works off two lists for patient appointments:

There’s an “official” list that’s shared with officials in Washington and shows the VA has been providing timely appointments, which Foote calls a sham list. And then there’s the real list that’s hidden from outsiders, where wait times can last more than a year.

“The scheme was deliberately put in place to avoid the VA’s own internal rules,” said Foote in Phoenix. “They developed the secret waiting list,” said Foote, a respected local physician.

The VA requires its hospitals to provide care to patients in a timely manner, typically within 14 to 30 days, Foote said.

According to Foote, the elaborate scheme in Phoenix involved shredding evidence to hide the long list of veterans waiting for appointments and care. Officials at the VA, Foote says, instructed their staff to not actually make doctor’s appointments for veterans within the computer system.

Instead, Foote says, when a veteran comes in seeking an appointment, “they enter information into the computer and do a screen capture hard copy printout. They then do not save what was put into the computer so there’s no record that you were ever here,” he said.

According to Foote, the information was gathered on the secret electronic list and then the information that would show when veterans first began waiting for an appointment was actually destroyed.

“That hard copy, if you will, that has the patient demographic information is then taken and placed onto a secret electronic waiting list, and then the data that is on that paper is shredded,” Foote said.” http://myfox8.com/2014/04/23/veterans-die-after-being-placed-on-va-hospitals-secret-waiting-list/