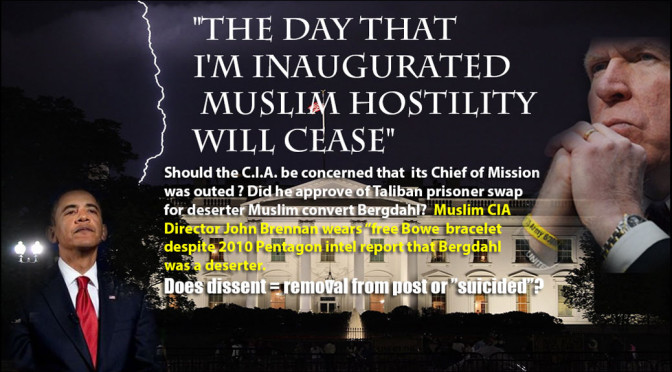 In 2013, despite Pentagon intel report and all of Bergdahl’s co-workers saying that he voluntarily left his post and deserted, Muslim convert CIA Director wore a support bracelet for Bowe Bergdahl. WHY??? http://nymag.com/daily/intelligencer/2013/02/bowe-bergdahl-pow-john-brennan-bracelet-wristband.html

Is that because Obama, who was raised in the Muslim country Indonesia and whose school records identify his religion as Muslim, had plans for raising the caliphate and destroying the West, especially America? http://www.breitbart.com/Breitbart-TV/2012/09/14/FLASHBACK-Obama-The-Day-Im-Inaugurated-Muslim-Hostility-Will-Ease

Look at the pictures and video in here. ”

Crucial component omitted as war on manufactured terror gets fresh influx
Missed in the growing storm over the Sgt. Bergdahl prisoner swap is the fact the terror group that arranged the trade was closely aligned with the CIA.

The Haqqani network is a product of a collaboration between the CIA and Pakistan’s ISI. Pakistan Army General Ashfaq Kayan referred to Haqqani as “a strategic asset.” Collaborative efforts between the two intelligence agencies resulted in the creation of the Taliban and al-Qaeda.

The establishment media is characterizing the Haqqani Group as one of the most dangerous and vicious terrorist groups in the world. Omitted from coverage is the fact Afghan mujahideen leader Mawlawi Jalaluddin Haqqani was a direct asset of the CIA in 1986 as the agency waged a covert war against the Soviet Union in Afghanistan.

Unlike other mujahideen leaders who dealt with Pakistani intelligence, Haqqani worked directly with the CIA. He was an important intermediary in control of territory where Osama bin Laden would command Afghan Arabs and other radical Islamists recruited by the CIA to fight a proxy war against the Soviets. Bin Laden called Haqqani a “hero” and “one of the foremost leaders of the jihad against the Soviets.”

“Haqqani traveled frequently to Peshawar to meet with a Pakistani and, separately, with an American intelligence officer, and to pick up supplies,” writes author Steve Coll. So important was the work of Haqqani in Afghanistan, he allegedly visited the White House and met with then president Ronald Reagan who had inherited the covert war in Afghanistan from the Carter Administration and the war’s primary architect, national security advisor Zbigniew Brzezinski. Haqqani would later join the Taliban, another important CIA asset, and work as a government minister with the group ruling Afghanistan with an iron fist and sharia law.

Like the Haqqani Group, the Taliban was a Frankenstein monster created by U.S. and Pakistani intelligence. Its strategic creation was “actively encouraged by the ISI and the CIA,” according to Selig Harrison, an expert on U.S. relations with Asia. “The Taliban are not just recruits from madrassas’ (Muslim theological schools) but are on the payroll of the ISI.”

“There was always a question about whether Haqqani was really Taliban, because he hadn’t come out of Kandahar,” Coll told PBS in 2006, “he wasn’t part of the core group. And it was quite reasonable to believe after 9/11 that maybe he could be flipped.… [US officials] summoned him to Pakistan, and they had a series of meetings with him, the content of which is unknown.”

The elder Haqqani and his sons would later play an important role in extending and amplifying the engineered war on terror. “Today [Haqqani] has turned his expertise on American and NATO forces,” The New York Times reported on June 17, 2008. “From his base in northwestern Pakistan, the aging Maulavi Haqqani has maintained a decades-old association with Osama bin Laden and other Arabs. Together with his son, Sirajuddin Haqqani, 34, he and these allies now share a common mission to again drive foreign forces from Afghanistan.”

The Sgt. Bergdahl trade will allow the neocons and their ideological allies to ramp up the flagging war on manufactured terror and claim the moral high ground.

“We do not negotiate with terrorists because in their willful targeting of the weak they embody evil, and because when you give in to evil, evil grows,” writes Dr. Sebastian Gorka, a military affairs fellow at the Foundation for the Defense of Democracies, a prominent neocon think tank linked to the American Enterprise Institute and the Hudson Institute.

In fact, as the hidden origins of international terrorism reveal, the United States not only negotiates with terrorists, it has created most terror groups. Once again, the establishment’s propaganda apparatus, the CIA’s Mighty Wurlitzer, is in the process of refurbishing the casus belli that has extended the war on terror for more than a decade and will continue to do so provided the historical ignorance and political acquiescence of the American people.”http://tomfernandez28.com/2014/06/02/sgt-bergdahl-release-arranged-by-cia-terror-group/

Guess where the Haqqani Network, which held Bowe Bergdahl for 5 years as captive,  is based? Pakistan. NOTE that Obama’s college roommate was from Pakistan and O’s passport revealed he traveled to Pakistan while he was a college student and when the U.S. BANNED TRAVEL TO PAKISTAN.  Why did he go there then??? http://theconservativetreehouse.com/2013/01/10/john-brennan-the-cia-zibgnew-brezinski-columbia-university-and-obama/

He, like the Clintons and other Alinsky Radicals, HATE the military.http://documents.nytimes.com/obama-s-1983-college-magazine-article

Barack Obama And His Mother (Ann Dunham-Obama-Soetoro) Likely Spent Time With CIA; The most well researched article on Obama’s history that I’ve found. A must read. Updated with Part II 8/18

REPORT: The CIA Has Been Secretly Training Syrian Rebels For Months

2013 “The CIA and US special operations forces have been training Syrian rebels for months, since long before President Barack Obama announced plans to arm the opposition, the Los Angeles Times reported Friday.

Training for rebel forces covers the use of anti-tank and anti-aircraft weapons and has been carried out at bases in Jordan and Turkey since late last year, the newspaper reported, citing unnamed US officials and rebel commanders.

The two-week courses, for about 20 to 45 fighters at a time, began last November at a new US base in the desert in southwest Jordan, it said.

The report came days after the Obama administration announced it had approved the arming of Syrian rebels, though analysts said the United States likely would avoid providing sophisticated guided anti-tank or anti-aircraft weapons.

The Central Intelligence Agency typically leads covert training and arming of fighters in foreign conflicts, while military special operations forces can be assigned to covert missions overseen by the spy agency.” http://www.businessinsider.com/cia-secret-training-syrian-rebels-2013-6

CBS News: CIA Station Chief In Afghanistan Whose Cover Was Blown By White House Will Have To Leave Country

LOOK AT THE ACTUAL EMAILS HERE!  WHO IS AMONG THE OBAMA CAMP:  JON PODESTA! LOOK AT THE BIG PICTURE. If you get the Chief of Mission out of the way, then the Caliphate faces no obstacle in Afghanistan…https://niqnaq.wordpress.com/2014/05/28/moa-says-everybody-knows-this-guys-name-is-greg-vogel-but-others-say-no-its-mike-raiole-heres-the-goddam-email/The Haqqani Nexus  and the Evolution of al-Qa’ida

The Haqqani Nexus  and the Evolution of al-Qa’ida

Admiral Lyons: The Islamic cloud over Brennan and Hagel

“One explosive issue is a report by John Guandolo that broke last week on Tom Trento’s “TrentoVision Show” and also was carried by Glenn Beck on Feb. 11. The report stated that Mr. Brennan was converted to Islam while CIA station chief in Saudi Arabia from 1996 to ‘99. Let’s be clear: In America, a man’s religion can never be a condition to his holding a government position. It is protected by both the First Amendment and Article 6 of the Constitution. Therefore, even if it is true that he converted, Mr. Brennan’s religion should not be an issue.

However, according to Mr. Guandolo — a former SWAT team leader at the FBI, counterterrorism and Muslim Brotherhood specialist and Marine platoon commander — what should be an issue was the Saudis’ targeted recruitment of Mr. Brennan to the ideology of Islam while he was serving as the CIA station chief in Riyadh. This was not just a conversion but a political act by a foreign intelligence service.” http://www.washingtontimes.com/news/2013/feb/19/the-islamic-cloud-over-brennan-and-hagel/

Meet Obama’s Wahhabist Relatives: the most extreme form of Islam there is. Fundraisers for jihad and Sharia schools in the Muslim world.

Retired U.S. Air Force Gen. Tom McInerney, who served as both assistant vice chief of staff and commander in chief of U.S. Air Forces Europe, has surprised interviewers on a radio program by confirming the presence of the Muslim Brotherhood inside the U.S. government.
http://www.wnd.com/2014/01/general-muslim-brotherhood-inside-obama-administration/#2WAZK6pEUfICq0vZ.99

A lot of amazing coincidences here too!

Infiltration has been underway for years but under Obama it is moving at warp speed. http://www.infiltratednation.com/2013/07/meet-some-of-newest-obama-white-house.html

WHAT DOES THE KORAN SAY ABOUT MUSLIMS LIVING UNDER A NON-MUSLIM GOVERNMENT? http://www.thereligionofpeace.com/Quran/014-loyalty-to-non-muslim-government.htm

Memo Outlines Obama’s Plan To Use Military Against Americans

“Can you imagine the 24/7 outrage that would have ensued among Democrats and the media if the Bush administration had drawn up plans like this? Now all we get is silence from those two groups…

Via The Washington Times:

A 2010 Pentagon directive on military support to civilian authorities details what critics say is a troubling policy that envisions the Obama administration’s potential use of military force against Americans.

The directive contains noncontroversial provisions on support to civilian fire and emergency services, special events and the domestic use of the Army Corps of Engineers.

The troubling aspect of the directive outlines presidential authority for the use of military arms and forces, including unarmed drones, in operations against domestic unrest.

“This appears to be the latest step in the administration’s decision to use force within the United States against its citizens,” said a defense official opposed to the directive.