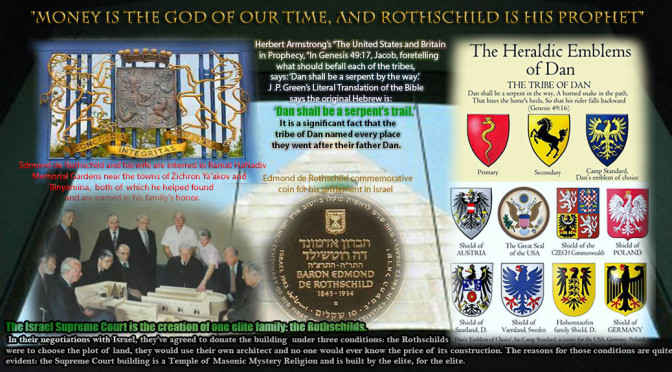 From “The Transfer Agreement” to “Balfour Declaration” everything was based on letter Gen. Albert Pike wrote to Giuseppe Mazzini Aug. 15 1871.   This letter remained on display at British Museum Library until Baron Rothschild became director.  For some reason the letter disappeared.

Is this “the beginning of Jacob’s Trouble?” Rothschild is one of the 13 Illuminati Bloodlines but few know the history of their involvement in the creation of the present state of Israel or the sinister motives in their worldwide empire. Follow “the trail of the serpent” known as the Tribe of Dan.

The Israel Supreme Court is the creation of one elite family: the Rothschilds. In their negotiations with Israel, they’ve agreed to donate the building under three conditions: the Rothschilds were to choose the plot of land, they would use their own architect and no one would ever know the price of its construction. The reasons for those conditions are quite evident: the Supreme Court building is a Temple of Masonic Mystery Religion and is built by the elite, for the elite.http://vigilantcitizen.com/sinistersites/sinister-sites-israel-supreme-court/

1599 Geneva Bible (GNV)    4 And I heard the number of them, which were sealed, and there were sealed [a]an hundred and four and forty thousand of all the tribes of the children of Israel.http://www.biblegateway.com/passage/?search=Revelation+7%3A4-8&version=GNV

9 Behold, I will make them [a]of the Synagogue of Satan, which call themselves Jews, and are not, but do lie: behold, I say, I will make them that they shall come [b]and worship before thy feet, and shall know that I have loved theehttp://www.biblegateway.com/passage/?search=Revelation+3%3A9&version=GNV

1 Then I looked, and lo, a Lamb [a]stood on mount Zion, and with him an [b]hundred forty and four thousand, having his Father’s [c]Name written in their foreheads. http://www.biblegateway.com/passage/?search=Revelation+14%3A1&version=GNV

Israel’s Emblems – Then and Now
THE TRIBE OF DAN
Dan was the fifth son of Jacob and the firstborn of Bilhah (Rachel’s maid). It can be reasoned from several sources that Dan adopted four, possibly five, tribal emblems.
http://www.cai.org/files/theme-sheets/en/ni2/si2010au.pdf

“Then, the five men return to their land and muster up a force of 600 men to invade that territory. On their way north, they visit Micah and entice the Levite to become their priest. They also steal the costly idols in the shrine. They then conquer this Canaanite bastion and bring many of their Danite relatives to settle down. From now on the tribe of Dan would be situated in two places. As was characteristic of the tribe of Dan, they changed the name of the place to Dan—and it is no coincidence.

We read in Mr. Herbert Armstrong’s The United States and Britain in Prophecy, “In Genesis 49:17, Jacob, foretelling what should befall each of the tribes, says: ‘Dan shall be a serpent by the way.’ [J.P. Green’s Literal Translation of the Bible] says the original Hebrew is: ‘Dan shall be a serpent’s trail.’ It is a significant fact that the tribe of Dan, one of the Ten Tribes, named every place they went after their father Dan.

“The tribe of Dan originally occupied a strip of coast country on the Mediterranean, west of Jerusalem. ‘And the coast of the children of Dan,’ we read in Joshua 19:47, ‘went out too little for them: therefore the children of Dan went up to fight against Leshem, and took it…and called Leshem, Dan, after the name of Dan their father. “In Judges 18:11-12, it is recorded that Danites took Kirjath-jearim, and ‘called that place Mananeh-Dan unto this day.’ A little later the same company of 600 armed Danites came to Laish, captured it, and ‘they called the name of the city Dan, after the name of Dan their father’ (verse 29). So notice how these Danites left their ‘serpent’s trail’ by the way—set up waymarks by which they may be traced today.

“In the Hebrew, vowels were not written…Thus the word ‘Dan’ in its English equivalent could be spelled, simply, ‘Dn.’ It might be pronounced as ‘Dan,’ or ‘Den,’ or ‘Din,’ or ‘Don,’ or ‘Dun’—and still could be the same original Hebrew name.

“The tribe of Dan occupied two different districts in the Holy Land before the Assyrian captivity. One colony lived on the seacoast of Palestine. They were principally seamen, and it is recorded Dan abode in ships (Judges 5:17).       When Assyria captured Israel, these Danites struck out in their ships and sailed west through the Mediterranean and north to Ireland. Just before his death, Moses prophesied of Dan: ‘Dan is a lion’s whelp: he shall leap from Bashan’ (Deut. 33:22). Along the shores of the Mediterranean they left their trail in ‘Den,’ ‘Don,’ and ‘Din.’

“Irish annals and history show that the new settlers of Ireland, at just this time, were the ‘Tuatha de Danaans,’ which means, translated, ‘Tribe of Dan.’…And in Ireland we find they left these ‘waymarks’: Dans-Laugh, Dan-Sower, Dun-dalk, Dun-gloe, Din-gle, Dunsmor (meaning ‘more Dans’). Moreover, the name Dunn in the Irish language means the same as Dan in the Hebrew: judge.”http://www.ucgoc.com/bs2/54Judges17.htm

“The Serpent’s Trail” –The Mysterious Tribe     of Dan

What happened to the Tribe of Dan? Why are they left out of the 144, 000 of Revelation? History reveals some fascinating facts about the powerful tribe of Dan and their perambulations and migrations in ancient times, as well as where they are on the earth, today!http://www.hope-of-israel.org/i000035a.htm

“At the southern end of Mount Carmel, between Zikhron Ya’akov and Binyamina, lies Ramat Hanadiv, a natural gem dedicated to the memory of Baron Edmond de Rothschild. Ramat Hanadiv’s vision focuses on the creation of sustainable interactions between man, nature and the environment.”

The Lost Tribe of Dan is the modern Netherlands and all other affiliated countries.

Key Prophecies: Jacob’s pronouncement over Dan is that he would be the Judge of his brothers: http://bibletribes.org/dan/introduction

Location of the Lost Tribes of Israel

(use with discernment and research for yourselves)