This supposed “one holy church,” this longed for world church, is a figment of a heretical imagination. The Bible does not tell us that there should be a world church. Quite the opposite. The Bible repeatedly warns that “Christendom” will become increasingly apostate as the time of Christ’s return draws near, and true Bible churches are commanded to remain separate from this wickedness. God is not fulfilling the Great Commission through a church, singular, but through churchES, plural. http://www.wayoflife.org/database/wcc.html 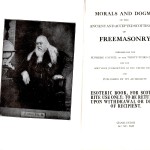 33rd Degree Freemason Albert Pike, author of “Morals and Dogma of the Ancient and Acceptable Scottish Rite of FREEMASONRY”

Look up page 321 or Lucifer, Baal, Satan, etc. in the index of the book. The Freemasons worship Lucifer the Light-Bringer. Period. The higher up you go, the more “knowledge” you will receive.  su_permalink]http://www.scribd.com/doc/150733192/Moral-And-Dogma-albert-Pike-pdf[/su_permalink]

“The Protocols of  the Learned Elders of Zion”

Read them all and see that it is those who are at the TOP of EVERY religion and organization who seek to brink Lucifer to power. http://www.biblebelievers.org.au/przion1.htm

The 3 World Wars of Freemasonry Forecast by Albert Pike

“Very few outsiders know about the intimate plans of Albert Pike and the architects of the New World Order.   In the 19th Century Albert Pike established a framework for bringing about the One World Order.  Based on a vision revealed to him, Albert Pike wrote a blueprint of events that would play themselves out in the 20th century, with even more of these events yet to come.  It is this blueprint which we believe unseen leaders are following today, knowingly or not, to engineer the planned Third and Final World War.”http://www.zengardner.com/3-world-wars-freemasonry-forecast-albert-pike/