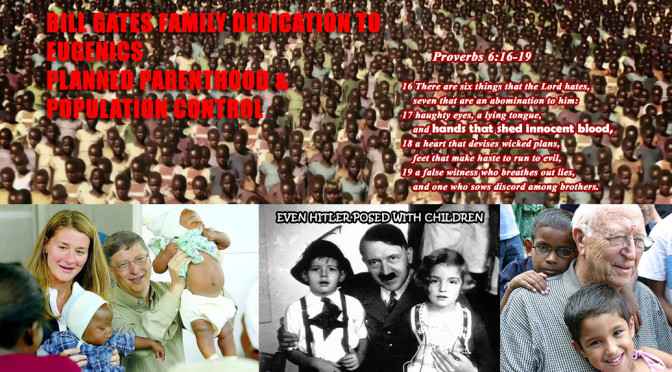 The Bill and Melinda Gates Foundation is funding the development of a contraceptive microchip that can be remotely controlled to release hormones that can act as abortifacients into a woman’s body for up to 16 years. Both the chip’s potential to take a life and the potential privacy concerns have drawn criticism. The chip, which measures 20 x 20 x 7 millimeters, can be implanted under the skin of a woman’s buttocks, upper arm, or abdomen in 30 minutes. The device contains a 16-year reservoir of the drug levonorgestrel, releasing 30 micrograms a day – but the dosage can be altered by remote control, as well. The technology was originally intended, and tested, to release osteoporosis medication in elderly women, but Dr. Robert Langer of MIT changed his focus to contraception after a personal discussion with Bill Gates. Gavin Corley, a biomedical engineer, told the BBC the technology could be used to achieve contraceptive targets in the developing world, indicating “a humanitarian application as opposed to satisfying a first-world need.”

The real purpose of the elite environmental movement is to build the structures (political, economic, ideological etc) of the ultimate monopoly: a corporate-communist world government.

WORLD DEPOPULATION VIA THE CLUB OF ROME AND THE NSA

Bill Gates is a member of the Club of Rome. Notable members include Henry Kissinger among others.

“a planning apparatus operating outside the control of the White House whose sole purpose is to reduce the world’s population by 2 billion people through war, famine, disease and any other means necessary.

This apparatus, which includes various levels of the government is determining U.S. foreign policy. In every political hotspot – El Salvador, the so-called arc of crisis in the Persian Gulf, Latin America, Southeast Asia and in Africa – the goal of U.S. foreign policy is population reduction.

The targeting agency for the operation is the National Security Council’s Ad Hoc Group on Population Policy. Its policy-planning group is in the U.S. State Department’s Office of Population Affairs, established in 1975 by Henry Kissinger.”

16 There are six things that the Lord hates,
seven that are an abomination to him:
17 haughty eyes, a lying tongue,
and hands that shed innocent blood,
18 a heart that devises wicked plans,
feet that make haste to run to evil,
19 a false witness who breathes out lies,
and one who sows discord among brothers.

A Japanese proposal to turn mosquitoes into “flying syringes” delivering vaccines has received funding to the tune of 100,000 dollars from the Bill and Melinda Gates Foundation. The Foundation also awarded several other grants to scientists.

A group, the Global Prolife Alliance (GPA) Council avers that after its web meeting on 28th April 2014 with relevant professionals and experts, it has identified the foreign sponsors of Boko Haram and terrorism in Nigeria. The foreign sponsors, the group said are the Biotechnology companies headed by Bill Gates and Monsanto, fighting to displace indigenous farmers in Nigeria and replace them with GMOs corporate farms in the North East food basket region of Nigeria. The aim is to capture the food security of Nigeria and control Africa’s Largest Nation by population and economy.  Here under are the details as contained in a press statement signed by Dr Philip Njemanze, the Chairman of GPA:  see above link.

MOYERS: But did you come to reproductive issues as an intellectual, philosophical pursuit? Or was there something that happened? Did come up on… was there a revelation?

GATES: When I was growing up, my parents were almost involved in various volunteer things. My dad was head of Planned Parenthood. And it was very controversial to be involved with that. And so it’s fascinating. At the dinner table my parents are very good at sharing the things that they were doing. And almost treating us like adults, talking about that.

My mom was on the United Way group that decides how to allocate the money and looks at all the different charities and makes the very hard decisions about where that pool of funds is going to go. So I always knew there was something about really educating people and giving them choices in terms of family size.”

GOYM…THE PROTOCOLS OF THE LEARNED ELDERS OF ZION

This is what is planned for the masses.