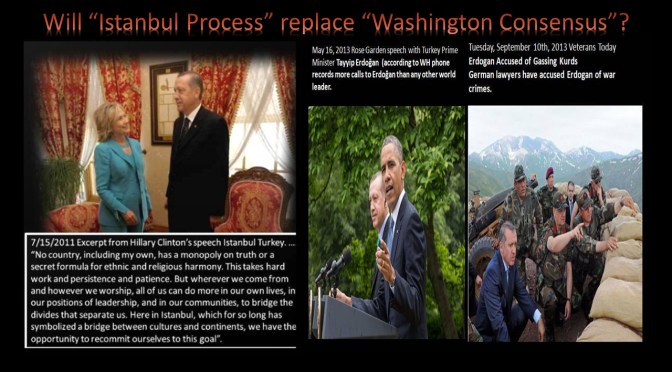 With Erdogen’s win today in first election their election  worries concerning democracy, liberties and Sharia have only begun.

Tayyip Erdogan is set to secure his place in history as Turkey’s first popularly elected president, but Joel Flynn asks how his tightening grip on power has polarized the nation, worried Western allies and raised fears of creeping authoritarianism.   With U.S. “Midwifing” Ukrainian crisis to overthrow EU will Turkey be granted admission into European Union?   One of main accomplishments of WWI was taking down last of Turkish Ottoman Empire.  After WWI the capital Constantinople changed to Istanbul.   Will “Istanbul Process” replace “Washington Consensus”??   Erdogan reported vowing to rewrite Turkey’s Constitution if elected president.  If the gradual encroachments to democracy in Turkey favoring Islamic Sharia Law the result will be “Head of Turkish-Ottoman Empire revived.

With Erdogen’s win today in first election their election  worries concerning democracy, liberties and Sharia have only begun.

Tayyip Erdogan is set to secure his place in history as Turkey’s first popularly elected president, but Joel Flynn asks how his tightening grip on power has polarized the nation, worried Western allies and raised fears of creeping authoritarianism.   With U.S. “Midwifing” Ukrainian crisis to overthrow EU will Turkey be granted admission into European Union?   One of main accomplishments of WWI was taking down last of Turkish Ottoman Empire.  After WWI the capital Constantinople changed to Istanbul.   Will “Istanbul Process” replace “Washington Consensus”??   Erdogan reported vowing to rewrite Turkey’s Constitution if elected president.  If the gradual encroachments to democracy in Turkey favoring Islamic Sharia Law the result will be “Head of Turkish-Ottoman Empire revived.

Erdogan replaced Economy Minister Zafer Caglayan, Interior Minister Muammer Guler and Erdogan Bayraktar, the minister for the environment and urban planning. All three men’s sons were detained as part of the corruption investigation. They all deny any wrongdoing.

Is there an obvious war brewing between Israel, Syria and Turkey?  Will Putin continue with Assad or unite with Erdogen?   For those who don’t understand when Britain surrendered to George Washington during Revolutionary War this was called “Washington Consensus”.

Hegelian Dialectic – The No. 1 Tool of the Illuminati -with examples  Iron and Clay do not mix as seen in Daniel’s interruption

Are we seeing  “Hegelian Conflict”  at play  to achieve “End state” of Unification  of Political and Religious Powers?

The Hegelian Dialectic is the framework for guiding our thoughts and actions into conflicts that lead us to a predetermined solution. When we remain locked into dialectical thinking, we cannot see out of the box.so we must step outside the dialectic to be released from the limitations of controlled and guided thought. Dialogue is the primary tool of the dialectic, and terror and intimidation are also acceptable formats for obtaining the goal. Today the dialectic is active in every political issue that encourages taking sides. We can see it in environmentalists instigating conflicts against private property owners, in democrats against republicans, in greens against libertarians, in communists against socialists, in neo-cons against traditional conservatives, in community activists against individuals, in pro-choice versus pro-life, in Christians against Muslims, in isolationists versus interventionists, in peace activists against war hawks. No matter what the issue, the invisible dialectic aims to control both the conflict and the resolution of differences, and leads everyone involved into a new cycle of conflicts.

While America is focused on latest obvious orchestrated crisis via our unguarded border.  The U.S. funded war is brewing between Israel and Turkey and our state controlled media says nothing.

Obama was “restrained” by the constitution last year preventing him from sending troops to Syria to take down Assad.

Due to America’s Fundamental Foundations on Christianity The biggest mistake Americans have made is not looking at the “War on Terror as a “Holy War”.

Erdogan’s plot almost worked! In the aftermath of the sarin attack, Pres. Obama began planning a massive US strike on dozens of Syrian targets, even though British intelligence had informed the US joint chiefs of staff that samples of the sarin gas obtained from the site of the attack did not match the chemical weapons in Syria’s possession. A former US intelligence official told Hersh that “Erdogan was known to be supporting the al-Nusra Front, a jihadist faction among the rebel opposition, as well as other Islamist rebel groups.” Hirsh revealed that the US Defense Intelligence Agency had issued “a highly classified” document on June 20, 2013, confirming that “Turkey and Saudi-based chemical facilitators were attempting to obtain sarin precursors in bulk, tens of kilograms, likely for the anticipated large scale production effort in Syria.” After a special UN mission went to Syria to investigate two earlier chemical attacks in Spring 2013, a person with close knowledge of UN’s activity told Hersh that “there was evidence linking the Syrian opposition to the first gas attack, on March 19 in Khan al-Assal, a village near Aleppo…. It was clear that the rebels used the gas.”  http://asbarez.com/121889/erdogan-waves-finger-at-obama-during-heated-white-house-talk/

Fact is when “Damascus” falls it will cause global effects unlike the manufactured economic and housing crisis.

The idea of Damascus’ doom coming from a war with Israel is confirmed by several verses. Isaiah 17 continues by describing what happens along with Damascus’ destruction:

Did Turkey Play a Role in Benghazi Attack?

Haitham Qdemathi, a U.S. citizen of Syrian descent who introduced himself as one of the political leaders of the Free Syrian Army (FSA,) told bianet they were grateful for the contributions of both the Turkish government and foreign fighters, such as Al-Qaeda militants, for their contributions to the rebel movement.

The fox was put in charge of the henhouse. The patients were put in charge of the asylum. An Islamic country run by a vicious thug who supports Hamas and Syrian Islamic terrorists and whose backers have ties to Al Qaeda, will get a giant amount of cash to lavish on the groups he supports.

The implication: Al-Sisi has been a lifelong Mossad agent. His mission: infiltrate the highest levels of power in an Arab Muslim country.  Who exactly is General Abdel Fattah el-Sisi? Born to a Moroccan Jewish mother, his maternal uncle was a member of David Ben Gurion’s political party. How did this Sephardi sleeper stay within the loop without being exposed for so long and rising to the top spot in the military?

The “End State”? Which established religion will be set up as global “super power” and head largest feudal system in world history?  Jewish Noahide Laws (An Established Religion) passed in 1990 Public Law 102-14, 102nd Congress, that the United States of America was founded upon the Seven Universal Laws of Noah as “Education Day” toward conditioning to the “7 Noahide Laws”.

Both Sharia and Nohaide Laws have similar laws concerning Non-Jews/Muslims.  Both share beheading capitol punishment for specific crimes including acknowledgment of Jesus Christ or Trinity.

Alinsky taught to paint the enemy as something to run from  Our Founding Fathers did NOT establish Constitution upon NO established religion.  Had this been so they would NOT have added “The Establishment Clause”.

Erdogen has been reported for Human Rights violations for gassing Kurds and funding  terrorist groups like Al Nursa Front.   Remember the history of WW1 in bringing down Turkey which was head of Turkish-Ottoman Empire.   Constantinople was renamed “Istanbul” during this time period. Facts are stubborn things!! Hillary’s Unamerican, UnConstitutional U.N “Istanbul Process” stands with Erdogen in surrendering “Washington Consensus for “Istanbul Process”.

Visiting Berlin, Turkey’s Prime Minister Recep Tayyip Erdogan has urged Germany to give greater backing to his country’s bid to join the EU.

He stressed the role Ankara could play in conflict resolution, for instance, arguing that Turkish membership would benefit the bloc.

“The financial crisis, the global crisis, the Arab spring and events in Syria and Egypt have shown that the European Union needs Turkey more than Turkey needs the EU,” he told the German Council on Foreign Relations think-tank.  Click Link with Video

“Unification of Svoboda with other opposition forces is not funny but dangerous,” the Ukrainian prime minister said commenting the thesis of Hungarian journalists that it is “funny when Yatseniuk and Tiahnybok stand side by side.”http://www.ukrainebusiness.com.ua/news/9207.html

“This is very dangerous for democracy in Ukraine, for the national peace and harmony,” the liaison department of the Cabinet of Ministers’ secretariat quoted Azarov as saying.

Recalling the opposition’s statement on uniting solely for resistance to the power, Mykola Azarov said, “It appears to be that they do not have fundamental differences, and their one task is the seizure of power.”

Are we seeing a “Hegelian Conflict” on a global scale of world powers engaging “Class Warfare” among the nations??

NO ARAB SPRING FOR TURKEY? STUDENTS RIOT IN THE STREETS AGAINST ERDOGAN STRIPPING OF RIGHTS

The Libyan Rebels Are Al Qaeda?!

What the media seem to forget to tell us is that the “rebels” are al Qaeda. Yep, the LIFG are al Qaeda! Hello! The idea that the media have never bothered to even inquire should be shocking, but I’m not shocked in the least.

Hillary’s U.N. Resolution 16/18 is Unconstitutional. Any Senator voting for this is UnAmerican. The U.S. Constitution already provides for Religious Tolerance however, it doesn’t provide for “Established Religions. http://www.humanrights.gov/2012/04/19/1618-report/

At the invitation of Secretary of State Hillary Clinton, representatives of 26 governments and four international organizations met in Washington, D.C. on December 12-14, 2011 to discuss the implementation of United Nations Human Rights Council Resolution (UNHRC) 16/18 on “Combating Intolerance, Negative Stereotyping and Stigmatization of, and Discrimination, Incitement to Violence and Violence Against, Persons Based on Religion or Belief.” In her closing remarks, Secretary Clinton stressed, “The United States is hosting this conference because religious freedom and freedom of expression are among our highest values. They are enshrined in our Constitution. For people everywhere, faith and religious practice is a central source of our identity. It provides our lives with meaning and context. It is fundamental to who we are.  http://geneva.usmission.gov/2012/04/19/implementation1618/

With each day our sovereignty as a nation erodes by “Silent Encroachments”.

Do you remember agreeing to succeed 1st Amendment to appease Islam or any Established Religion?

HR Resolution 16/18
–– the OIC, the UN and the criminalization

7 thoughts on “A WAR IS BREWING, THE MIDDLE EAST USING DUALISM OF “HEGELIAN CONFLICT””