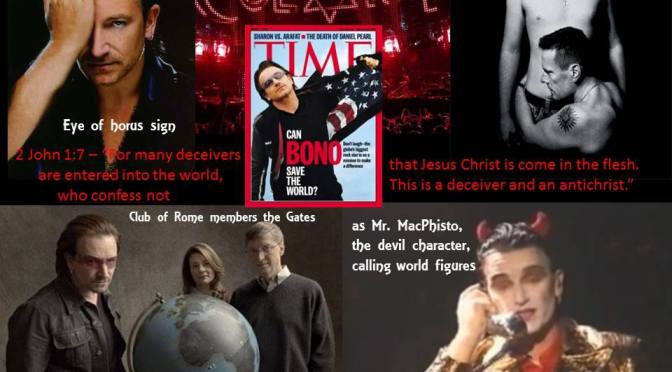 Bono  says he is a Christian. But his past and present actions sure tell a different story, especially his supposed declaration of his faith in Jesus while releasing music with gays embracing on his latest CD.  He is singing for the United Nations because they supposedly don’t have enough money for Ebola and AIDS, despite the fact that America  pays  a majority of the money given to the UN. Bono is a deceiver and he is raking in all kinds of sheep through the Emergent Church movement (Rick Warren), a deception that needs to be brought out into the open. UN is the gatekeeper for the One World Religion that will come, through the deception of false pastors and celebrities such as Bono, preaching unity, world peace, and social justice, while taking care of Mother Earth: the Gaia Religion that the New Age movement will use to deceive the masses.

“Bruce Springsteen and Coldplay’s Chris Martin will perform with U2 Minus 1 in a live World AIDS Day performance on Monday in New York’s Time Square, filling in for the group’s injured lead singer Bono who is recovering from a cycling accident.

The two rock stars will join the other member of the Irish band, Adam Clayton, The Edge and Larry Mullen Jr., to perform U2 songs. Rapper Kanye West and Carrie Underwood will also perform at the concert on World AIDS Day.”

U2 Frontman Bono: Christian or antichrist?

“By no means do I ever want to make the serious mistake of so many Christians in times past of calling any given public figure the Antichrist. We are to be exceedingly cautious in these matters of Bible prophecy. Based on the fact that the Bible says there are “many antichrists” (1 John 2:18) and the son of perdition will oppose and exalt himself above all that is called God, or that is worshipped and show himself that he is God (2 Thessalonians 2:3,4), we ought to be especially alarmed and watchful when a public figure like U2 frontman Bono manifests such a blasphemous spirit of antichrist in conjunction with musical worship, idolatry and political power.”

The Emerging Church and the Bono-Screwtape Connection – Clip

Bono of U2 is viewed by many as a “prophet” and icon in the Emergent Church movement. He states that his satanic stage personas were inspired by C.S. Lewis’ Screwtape Letters, but in what way and for what purpose? Watch as we reveal the truth of what inspires this Emergent rocker.

See Bono in his devilish character Mr. Macphisto, who calls world leaders and organizations, such as the UN, onstage…very evil looking

Bono discusses his faith…and his new album, the one with 2 gay men embracing

“Later, in an interview with Focus on the Family’s Jim Daly, Bono revealed Christianity’s future influence on his music. “It’s very annoying following this Person of Christ around [chuckling], because He’s very demanding of your life.”  NOT annoying for Christians who love the Lord…Bible says not to make jest

Eye of Horus is known by many names: the Eye or Ra, the Eye of Osiris, the Eye of the Moon, or Wedjat. Horus and Ra are two references of the same ancient Egyptian deity, while Osiris is Horus’ father. Horus (or Ra) was regarded as the Sun god, or the Sky god, and is said in legend to be half man – half falcon. The Eye of Horus is one of ancient Egypt’s most popular symbols, and hieroglyphic inscriptions of it are found in many archeological sites across Egypt. Many tombs have been found to contain the Eye of Horus hieroglyphs.

The hexagram referred to in bible as “Star of Remphan” is used in many occult and new age high ceremonies.