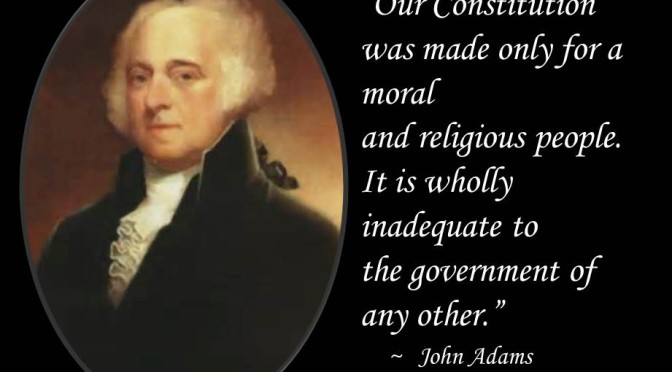 President Adams called for a National Day of Fasting and Prayer for the country could “call to mind our numerous offenses against the most high God, confess them before Him with the sincerest penitence, implore his pardoning mercy, through the Great Mediator and Redeemer, for our past transgression, and that through the grace of His Holy Spirit, we may be disposed and enabled to yield a more suitable obedience. . .”

On April 18, 1775, a British soldier ordered him, John Hancock, and others to “disperse in the name of George the Sovereign King of England.

Adams responded to him:

“We recognize no sovereign but God, and no king but Jesus!”

“We have no government armed with power capable of contending with human passions unbridled by morality and religion. Avarice, ambition, revenge, or gallantry would break the strongest cords of our Constitution as a whale goes through a net. Our Constitution was made only for a moral and religious people. It is wholly inadequate to the government of any other.”