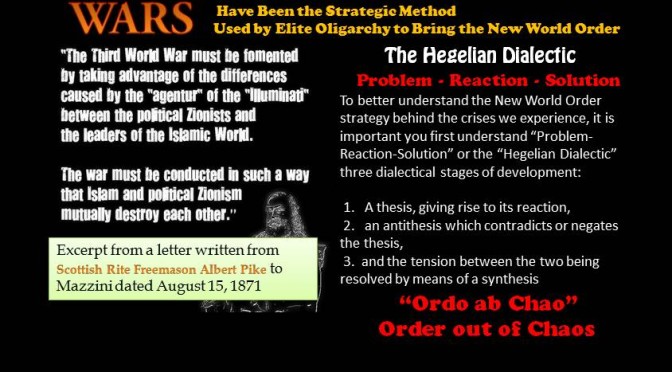 WARS…think the Ukraine conflict “just happened” like the so-called “Arab Spring”? These are orchestrated by elite oligarchy.
ALBERT PIKE, a Freemason, described in a letter he wrote to Mazzini, dated August 15, 1871. This letter graphically outlined plans for 3 WORLD WARS that were seen as necessary to bring about the One World Order. Albert Pike’s 1871 Plan For The Three World Wars
In 1871 Albert Pike envisioned three World Wars to be followed by an unparalleled economic disaster. Pike’s plans have come to fruition, shockingly ‘on target’. Who is Pike and perhaps more importantly who backed Pike?

Saul Alinsky was mentor to many radicals, including Obama and Hillary. WHO FOLLOWS A MAN WITH A BOOK DEDICATION TO LUCIFER? People who want to bring Satan’s kingdom, that is who! Call them Socialists, Communists, Marxists, Luciferians, Illuminati, Zionists, etc. THEY ARE ALL PLAYING ON THE SAME TEAM! http://fellowshipoftheminds.com/2011/05/10/obamas-mentor-saul-alinsky-was-a-luciferian/

ALBERT PIKE, a Freemason, described in a letter he wrote to Mazzini, dated August 15, 1871. This letter graphically outlined plans for 3 WORLD WARS that were seen as necessary to bring about the One World Order. Albert Pike’s 1871 Plan For The Three World Wars
In 1871 Albert Pike envisioned three World Wars to be followed by an unparalleled economic disaster. Pike’s plans have come to fruition, shockingly ‘on target’. Who is Pike and perhaps more importantly who backed Pike?

“The First World War must be brought about in order to permit the Illuminati to overthrow the power of the Czars in Russia and of making that country a fortress of atheistic Communism. The divergences caused by the “agentur” (agents) of the Illuminati between the British and Germanic Empires will be used to foment this war. At the end of the war, Communism will be built and used in order to destroy the other governments and in order to weaken the religions.”
“The Second World War must be fomented by taking advantage of the differences between the Fascists and the political Zionists. This war must be brought about so that Nazism is destroyed and that the political Zionism be strong enough to institute a sovereign state of Israel in Palestine. During the Second World War, International Communism must become strong enough in order to balance Christendom, which would be then restrained and held in check until the time when we would need it for the final social cataclysm.”
“The Third World War must be fomented by taking advantage of the differences caused by the “agentur” of the “Illuminati” between the political Zionists and the leaders of Islamic World. The war must be conducted in such a way that Islam (the Moslem Arabic World) and political Zionism (the State of Israel) mutually destroy each other. Meanwhile the other nations, once more divided on this issue will be constrained to fight to the point of complete physical, moral, spiritual and economical exhaustion…We shall unleash the Nihilists and the atheists, and we shall provoke a formidable social cataclysm which in all its horror will show clearly to the nations the effect of absolute atheism, origin of savagery and of the most bloody turmoil. Then everywhere, the citizens, obliged to defend themselves against the world minority of revolutionaries, will exterminate those destroyers of civilization, and the multitude, disillusioned with Christianity, whose deistic spirits will from that moment be without compass or direction, anxious for an ideal, but without knowing where to render its adoration, will receive the true light through the universal manifestation of the pure doctrine of Lucifer, brought finally out in the public view. This manifestation will result from the general reactionary movement which will follow the destruction of Christianity and atheism, both conquered and exterminated at the same time.”
http://www.libertyforlife.com/nwo/albert_pike.htm

MORALS and DOGMA by ALBERT PIKE
Morals and Dogma of the Ancient and Accepted Scottish Rite of Freemasonry , prepared for the Supreme Council of the Thirty Third Degree for the Southern Jurisdiction of the United States: Charleston, 1871.
http://www.bibliotecapleyades.net/sociopolitica/morals_dogma/apike.htm

Pawns in the Game

A Satanic conspiracy
to control the world

First printed in 1954, “Pawns in the Game” is the best single work available on the evil conspiracy that has been responsible for the devastating wars and continuing conflicts of the past century, and which is now close to its ultimate goal of total world domination through a dictatorial One World Government.

Pawns in the Game is written by William Guy Carr (1895-1959), a noted author who had a distinguished career as a Canadian naval officer, including outstanding service during World War II. The book begins as follows:

“Here is a TRUE story of international intrigue, romance, corruption, graft, and political assassinations, the like of which has never been written before. It is the story of how different groups or atheistic-materialistic men have played in an international chess tournament to decide which group would win ultimate control of the wealth, natural resources, and man-power of the entire world. It is explained how the game has reached the final stage. The lnternational Communists, and the International Capitalists, (both of whom have totalitarian ambitions) have temporarily joined hands to defeat Christian-democracy.

“The cover design shows that all moves made by the International Conspirators are directed by Satan and while the situation is decidedly serious it is definitely not hopeless. The solution is to end the game the International Conspirators have been playing right now before one or another totalitarian-minded group impose their ideas on the rest of mankind. The story is sensational and shocking, but it is educational because it is the TRUTH. The author offers practical solutions to problems so many people consider insoluble.”

Here are excerpts from the introduction of this book. We may publish excerpts from other chapters in the future.
http://www.michaeljournal.org/pawns.asp

John Robison’s book “PROOF OF A CONSPIRACY AGAINST ALL THE RELIGIONS AND GOVERNMENTS OF EUROPE, CARRIED ON IN THE SECRET MEETINGS OF
FREE MASONS, ILLUMINATI, AND READING SOCIETIES,COLLECTED FROM GOOD AUTHORITIES”
BY JOHN ROBISON, A. M.
PROFESSOR OF NATURAL PHILOSOPHY, AND SECRETARY TO THE ROYAL SOCIETY OF EDINBURGH [1798] http://www.scribd.com/doc/64171463/Joh-Robison-Proofs-of-a-Conspiracy