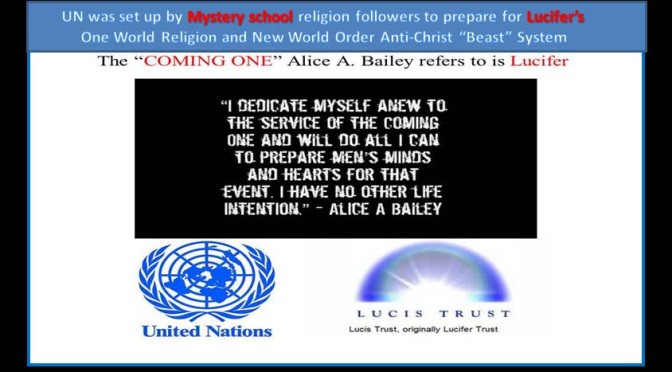 GAMALIEL FOUNDATION, WHERE OBAMA GOT HIS START
http://www.discoverthenetworks.org/printgroupProfile.asp?grpid=7004

The Lucis Trust is the Publishing House which prints and disseminates United Nations material. It is a devastating indictment of the New Age and Pagan nature of the UN.
Lucis Trust was established in 1922 as Lucifer Trust by Alice Bailey as the publishing company to disseminate the books of Bailey and Blavatsky and the Theosophical Society. The title page of Alice Bailey’s book, ‘Initiation, Human and Solar’ was originally printed in 1922, and clearly shows the publishing house as ‘Lucifer Publishing CoIn 1923.’

Bailey changed the name to Lucis Trust, because Lucifer Trust revealed the true nature of the New Age Movement too clearly. (Constance Cumbey, The Hidden Dangers of the Rainbow, p. 49). A quick trip to any New Age bookstore will reveal that many of the hard-core New Age books are published by Lucis Trust.
http://www.bibliotecapleyades.net/sociopolitica/esp_sociopol_lucytrust04.htm

Gamaliel Foundation:  where Obama got his start http://www.discoverthenetworks.org/printgroupProfile.asp?grpid=7004

Secrets of the UN Meditation Room
27 March 2009
“But the stone in the middle of the room has more to tell us. We may see it as an altar, empty not because there is no God, not because it is an altar to an unknown god, but because it is dedicated to the God whom men worship under many names and in many forms.” (Hammerskjold in his own words). Obviously, this is a Satanic delusion because we know that God’s name is the Jehovah of Israel, and his form is that of Jesus of Nazareth. He, the God of the Bible, said, “Thou shalt not make unto thee any graven image, or any likeness of any thing that is in heaven above, or that is in the earth beneath, or that is in the water under the earth.” –Exodus 20:4.
http://www.biblenation.org/2009/03/secrets-of-the-un-meditation-room/

This is Part Two of a 3-part series, “UN is a Hotbed of New Age Occult.”

In the name of universal brotherhood and Gaia environmentalism, the UN is actively promoting a new paganism that is a hodge podge of New Agism, Eastern mysticism, and covert Satanism.
http://fellowshipoftheminds.com/2011/04/05/un-hotbed-of-new-age-satanism-the-meditation-room/

THE TEN STRATEGIES OF THE PLAN – Alice Bailey, New Age Guru. United Nations Plan
1. Push God out of the schools. If the people grow up without reference to God, then they will consider God irrelevant to day to day life. In the last fifty years this has happened. God is irrelevant to most people.
2. Break the Traditional Judaeo-Christian Family Concept. Break communication between parents and children so that parents can’t pass on spiritual values to their children. Do this by pushing excessive child rights.
3. Remove restrictions on sex. Sex is the biggest joy and Christianity robs people of this. People must be freed to enjoy it without restrictions. It’s not just for married, it’s for everybody.
4. Since sex is the greatest expression of man’s enjoyment of life, man must be free to express sex in ALL its forms. Homosexuality, orgies, even bestiality are desirable so long as no one is being abused or harmed.
5. People must be free to abort unwanted children. If a man can have sex and then live without the consequences then the same should be true for a woman too. A woman must have the right to abort an unwanted child.
6. Every person develops soul bonds, so when a soul bond wears out a person must be free to divorce. When one starts to grow, one must be free to get together with that person even if they are married . . .
7. Defuse religious radicalism. Christianity says JESUS IS THE ONLY WAY. Defuse this by a) silencing Christianity and b) promoting other faiths (the creation of interfaith harmony)
8. Use the Media to Influence Mass Opinion. Create mass opinion that is receptive to these values by using TV, film, the press etc. (NB what western believers call normal in the African church would be pornography).
9. Debase art in all its forms. Corrupt music, painting, poetry and every expression of the heart and make is obscene, immoral and occultic. Debase the arts in every way possible.
10.Get the church to endorse every one of these nine strategies. Get the church to accept these principles and to say they’re OK (then legal ground is given for these values to get a foothold).

Q: So how do you get a NEW WORLD ORDER you may ask?

A: DESTROY THE CHRISTIAN CONCEPT. MAKE EVERYONE HATE THEM, ADD NON-BIBLICAL IDEAS AND INTERMIX IT WITH THE CHRISTIAN NORM, DESTROY IT WITH EVERYTHING IN YOUR POWER. DONE!!!
http://omarcarter.com/2010/03/27/strategies-on-how-to-get-to-a-new-world-order/

Lucis Trust was established in 1922 as Lucifer Trust by Alice Bailey as the publishing company to disseminate the books of Bailey and Blavatsky and the Theosophical Society. The title page of Alice Bailey’s book, ‘Initiation, Human and Solar’ was originally printed in 1922, and clearly shows the publishing house as ‘Lucifer Publishing CoIn 1923.’
http://www.bibliotecapleyades.net/sociopolitica/esp_sociopol_lucytrust04.htm

Why are world power leaders in competition for power? Revelation 12:9 And the great dragon was cast out, that old serpent, called the Devil, and Satan, which deceiveth the whole world: he was cast out into the earth, and his angels were cast out with him. Lucifer will give up his power to [The] Anti-Christ at appointed time. This is how he will be able to do “signs and wonders”.