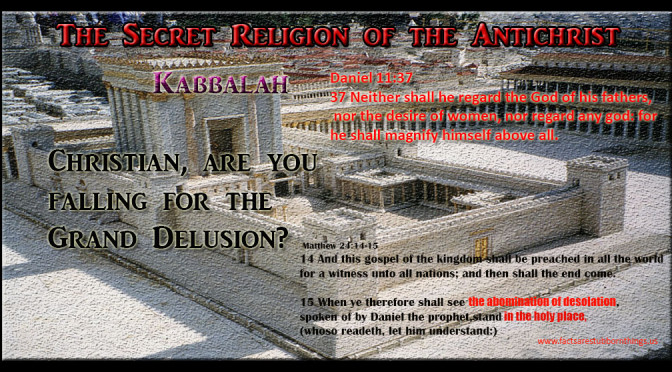 Rothschilds involvement in the creation of the state of Israel goes back to the 1800’s.  Are you aware of exactly WHO the Rothschild family really is and the “god” that they serve?   Rothshild family claim Ashkenazi  descent. Baron Edmond de Rotshchild is recognized as “Known Benefactor  of The Modern Land of Israel”. The biblical term for Jew is descendants from Tribe of Judah.  Only the Tribe of Judah and part of Benjamin stayed after destruction of Judah. The deception will be on a wide grand scale.

Edom is in modern Jewry.” – The Jewish Encyclopedia, 1925 edition, Vol. 5, Page 41. . Also, according to The New Standard Jewish Encyclopedia (1977 p. 589; and Encyclopedia Judaica 1971, Vol. 6, p 378)  Amazing the trail from Esau, Edom,  Communism ,Kabbalah and the color red.  Even the name  Rothschild being German translated is  “red shield”.    In the book of Revelation 2:9 and 3:9  it  mentions a “Synagogue of Satan” and those who say they are Jews and are not.   Edomites were the enemies of Israel throughout the old testament.

“Strictly speaking it is incorrect to call an ancient Israelite a ‘Jew’ or to call a contemporary Jew an Israelite or a Hebrew.”
(1980 Jewish Almanac, p. 3)Compiled and Edited by Richard Siegel and Carl Rheins (New York: Bantam Books, 1980) p. 3.)

Which remnant of Ancient Babylon will open The Sixth Seal?

Don’t let anyone deceive you in any way, for that day will not come until the rebellion occurs and the man of lawlessness is revealed, the man doomed to destruction. ” 2 Thessalonians 2:3

2 John 1:7  “I say this because many deceivers, who do not acknowledge Jesus Christ as coming in the flesh, have gone out into the world. Any such person is the deceiver and the antichrist.”

Scriptures states God appeared to Solomon twice warning him concerning idols and pagan religions being practiced among his 600  wives. Solomon did not follow in his father David’s footsteps. Instead he made alliances and marriages with his father’s enemies. Among Solomon’s 600 wives was Pharaoh’s daughter to whom he erected many statues including Molech, which required child sacrifice.

Solomon and King of Tyre created a massive system of trade.  Solomon taxed Israel 666 talents of gold to build the massive temple which the King of Tyre aided with “cedars of Lebanon”.

The entire chapter of I Kings 11 details God’s judgement on Solomon for leading Israel into idolatry. After Solomon refuses to repent, God stirs up the King of Tyre against Solomon.   “The Keys of Solomon” served as the foundation for Kabbalah.   The unrepentant Ahab married Jezebel, daughter of King Ethbaal King of Tyre and the Phoenicians.  America founded upon Divine Law is now repeating the history of Judah after Jezebel took control.  After Jezebel set up her idols of Ba’al the priesthood and Judah worshipped Ba’al.  The process of Israel and Judah’s fall was a gradual one incorporating traditions and idolatry of those around them.  The prophetic voice aligned itself up with the political voice both from fear of Jezebel and security in time of famine.

The Temple of Solomon International Headquarters of Universal Church of The Temple of “god” in São Paulo, Brazil.

Galatians 3:26 “So in Christ Jesus you are all children of God through faith, 27 for all of you who were baptized into Christ have clothed yourselves with Christ. 28 There is neither Jew nor Gentile, neither slave nor free, nor is there male and female, for you are all one in Christ Jesus. 29 If you belong to Christ, then you are Abraham’s seed, and heirs according to the promise.”

A giant bronze statue of Prince Charles as a winged hero “saving the world” was erected on Wednesday, 6 March 2002

A giant bronze statue of Prince Charles as a winged hero “saving the world” is to become the centerpiece of a remote Amazonian town.

The Prince was presented with a model of the sculpture, which shows him with bulging muscles, pinned back ears and only a loin cloth to protect his modesty.

During his visit to Tocantins, the state in central Brazil, the Prince was told the full size piece would be erected in a square named in his honor in the main town of Palmas.  Flight distance between São Paulo and Palmas less than 1000 miles.

Rome and the Abomination of Desolation

Every prophecy Jesus gave was fulfilled during destruction of the 2nd Temple after daily sacrifices began.  The apostles in Jerusalem remembered the Master’s warning. Ten years earlier, in the last days before he suffered, the Master told his disciples that they would hear of wars and natural disasters and experience harsh persecution, but those things did not signify either the fall of Jerusalem or the coming of the Son of Man. Instead, they should watch for a definitive sign: “The abomination of desolation standing where he ought not to be” (Mark 13:14), that is, “the abomination of desolation spoken of through the prophet Daniel, standing in the holy place” (Matthew 24:15). He told them that when they saw the abomination of desolation, they would know that the final calamity before his coming was imminent, and they should flee from Jerusalem and from the cities and villages of Judea.

The disciples prepared to flee. Without a doubt, the final battle of Gog and Magog, as predicted by Ezekiel and Zechariah, loomed just ahead. Already the armies of Gog and Magog came marching from the north under the standards of Rome.  Short history leading to destruction of second temple.   The prophecies of New Testament must be fulfilled that the gospel of Jesus Christ be preached to all nations.  This was the promise to Abraham the seed  not of many but of Jesus Christ and in Him shall all the nations of the earth be blessed.  America was founded upon the same Divine Law as Mayflower Compact.  ”

“Christianity is part of common law”

James Wilson signer of both Declaration of Independence and Constitution.   Divine Law is based on Sir William Blackstone’s government philosophy (LONANG) Law’s of Nature and Nature’s God.

Christ hath redeemed us from the curse of the law, being made a curse for us: for it is written, Cursed is every one that hangeth on a tree: Galatians 3:13

THE RESTORATION OF ISRAL

The owner of a red cow was offered $1 million for it, as rabbis inspect what might be a suitable parah aduma for the 3rd Beis Hamikdash.

5 And Jesus answering them began to say, Take heed lest any man deceive you:

6 For many shall come in my name, saying, I am Christ; and shall deceive many.

7 And when ye shall hear of wars and rumours of wars, be ye not troubled: for such things must needs be; but the end shall not be yet.

Modern Mosaic law passed even though it is expressly prohibited by Establishment Clause.

The Noahide Laws (established religion) were passed in 1993 under mysterious circumstances by Congress and George H.W. Bush. Witness the account by former Congressman William E. Dannemeyer  Can we see a pattern of bi-partisan support of religious Hegelian Dialect?  The Noahide Laws were passed to eliminate our foundation on The Ten Commandments.  The U.N.  has accepted “Progressive Judaism”  religious NGO  has been accepted  by U.N.  This is the judgment on America violating our Establishment Clause ensuring protection against biblical curse while follows religious works.

Shaar Hashamayim Yeshiva is an Ashkenazi yeshiva in Jerusalem dedicated to the study of the Kabbalistic teachings of the Arizal. It is famous for its student body of advanced Kabbalists — many of them Roshei Yeshiva and Torah scholars — as well as beginning and intermediate scholars who study both the revealed and concealed Torah.

Part 12: The Secret Religion of the Antichrist – John S. Torell

As we come closer to the end times and the Great Tribulation, it is imperative to find out what the Antichrist religion will entail and the Bible gives plenty of evidence to identify this secret religion of the Man of Sin. The Scriptures say he will be Jewish and will not worship the God of his father’s but the god of the Kabbalah, and his secret number will be 666, a number that King Solomon took as the head of the Kabbalistic movement. He will rule the world from Jerusalem where he will build a new temple and reinstitute daily sacrifices.

This Man of Sin won’t tolerate any other religion and will relentlessly persecute all Christians who refuse to take his mark of loyalty and join his religious system because he cannot co-exist with Jesus Christ. He will be empowered by Satan and will be introduced as the long awaited messiah. People will be told that the Jesus of the New Testament is an imposter. The book of Hebrews with its references to temple worship and sacrifices no longer being valid will be declared blasphemy and it will be total war against God and the Christians on earth. Are you prepared to face the Antichrist régime and warning those around you of the impending danger? VIDEO The Secret Religion of the Antichrist