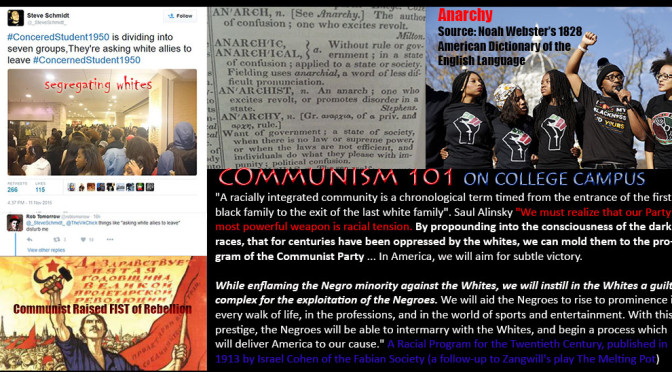 Across the nation, we are seeing college students “rise up” in protest against cases of white privilege, alleged racism, and lack of response from white college administrations. Is it not obvious that we are witnessing a coordinated Communist attack? History and documented facts show the answer is NO.

SEPARATE   and  not Equal?

“As the night wore on, local reporter Jared Koller documented hours of student discussion facilitated by the movement leaders, noting that white students were asked to join a separate group at the same site.

“A grassroots student group interrupted Kansas’s chancellor at a Town Hall, listing 15 demands to a packed auditorium and overflow room of about 1,000 students, faculty, staff and top-level administrators.

The University organized the event in response to protests at the University of Missouri and Yale University, and it was moderated by Chancellor Bernadette Gray-Little. It was an emotional event featuring testimony about the way blacks are treated on campus — and that was even before the protesters took over the stage.

On June 17, 1957, this passage was read into the Congressional Record by Rep. Thomas G. Abernathy.

In 1922, the Russian Comintern provided $300,000 for the spreading of communist propaganda among Negroes. In 1925, the Communist Party U.S.A. told its members:

“The aim of our Party in our work among the Negro masses is to create a powerful proletarian movement which will fight and lead the struggle of the Negro race against the exploitation and oppression in every form and which will be a militant part of the revolutionary movement of the whole American working class … and connect them with the struggles of national minorities and colonial peoples of all the world and thereby the cause of world revolution and the dictatorship of the proletariat.”

In 1925, a dozen blacks were recruited for propaganda training in Russia. That same year, the American Negro Labor Congress was established. In 1930, they changed their name to the League of Struggle for Negro Rights. They merged with the United Negro Congress when it was founded in 1936 in Washington, D.C. By 1940, communists made up two-thirds of its membership. In 1947, they united with the Civil Rights Congress, a communist front group.

“A racially integrated community is a chronological term timed from the entrance of the first black family to the exit of the last white family”. Saul Alinsky “We must realize that our Party’s most powerful weapon is racial tension. By propounding into the consciousness of the dark races, that for centuries have been oppressed by the whites, we can mold them to the program of the Communist Party … In America, we will aim for subtle victory.

While enflaming the Negro minority against the Whites, we will instill in the Whites a guilt complex for the exploitation of the Negroes. We will aid the Negroes to rise to prominence in every walk of life, in the professions, and in the world of sports and entertainment. With this prestige, the Negroes will be able to intermarry with the Whites, and begin a process which will deliver America to our cause.” A Racial Program for the Twentieth Century, published in 1913 by Israel Cohen of the Fabian Society (a follow-up to Zangwill’s play The Melting Pot)

Anarchy U.S.A.: In the Name of Civil Rights

This amazing documentary was forgotten for many years. Although it was produced in 1965 at the height of the civil-rights movement, it is far from being out of date. It provides lessons and insights that could not have been appreciated almost five decades ago.

“Hundreds of Ithaca College students walked out of class Wednesday to protest series of racially-charged incidents on campus.

Following the lead of University of Missouri students, the Ithaca protesters demanded the resignation of college president Tom Rochon, who was accused of ignoring a tense racial climate at the Upstate New York campus.”