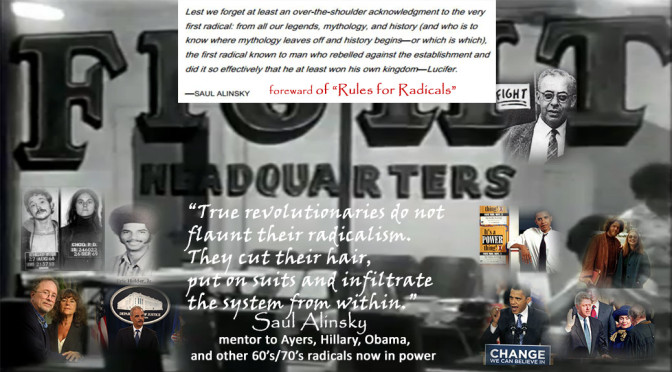 Obama, Alinsky and the Devil

“When people ask me, “Why would Obama want to destroy America” — at least the America that most Conservatives know and love? It’s simple. Why wait for Hell, when you can create Hell on Earth?

We often hear of Liberals use of Alinsky’s Rules for Radicals, and people discuss Alinsky’s organizing abilities. What they omit is his underlying philosophy. Alinsky built his organizing model on a love of creating hell.”

ALINSKY: They’re my kind of people.

Saul Alinsky headed (IAF) Industrial Area Foundation starting in 1940.  Is it a coincidence in 1940 “Smith Act” was passed?  Both (IAF) and Gamaliel Foundation used to organize the Leninist-Marxist New America.

During 50’s, 60’s, 70’s attempted revolutions organized by “Red Outside Agitator Saul Alinsky organizing tactics Alinsky stated: “We have the people but we don’t have the power”.  Now they have the power and cannot fathom how organized they are.  Churches are inviting satan right behind the pulpits.

Saul Alinsky dedicated his book “Rules for Radicals” to Lucifer. That should tell you something about the mission that he and the other 60’s & 70’s radicals have planned for America and the world. The young radicals  he mentored such as Hillary Clinton, Bill Ayers, and his wife Bernadine Dohrn, both members of the domestic terrorist group The Weatherman ( or Weather Underground) attended his community organizing institutes such as Industrial Areas Foundation. Others, such as Barack Hussein Obama and current Pentagon Religious Tolerance Policy task force head Mikey Weinstein, founder of the anti-Christian Military Religious Freedom Foundation, were trained at the Alinsky inspired Gamaliel Foundation.  Obama and his fellow radicals are now in position of power in institutions across America, including universities,  public schools, businesses, the judiciary, cabinet secretaries, Congress, and believe it or not, CHURCH organizations. The radical change of America that we are witnessing is not a sudden occurrence but rather the result of a long, well thought out plan by those, including the founders of the United Nations,  who seek to bring their “messiah” to rule in his kingdom on earth. It’s not a conspiracy. They’ve left a trail of breadcrumbs for anyone to follow.

In 1969, Weather Underground founders Bill Ayers and Bernardine Dohrn (who were to become Pres. Obama’s personal friends and associates for many years) put Charles Manson on the cover of their occasional newspaper, “Fire”. At what was billed as a “War Council” in Flint Michigan that same year, Ayers and his comrades took to greeting eachother with “the fork” – four fingers pointed upwards, in honor of Manson. (Google Dohrn’s Flint conference quote on Manson – and Sharon Tate, who was 8 1/2 months pregnant at the time.) In 1972 Ayers dedicated the WU’s manifesto, “Prairie Fire”, to his cultural and political heroes — a list which included Sen. Robert Kennedy’s assassin, Sirhan Sirhan.

Throughout their career as terrorist bombers, Ayers and Dohrn were constantly trying to break the Left free of its “bourgeois” commitment to any standard of justice or decency. By adopting Charles Manson as their own, by praising Manson as a hero of the counterculture, they hoped to smash the Left’s “bourgeois” ties to civilization and thus spark similar acts of horrific “revolutionary” violence against innocent people.

Over 400 people attended that Flint conference. Can’t help but wonder what positions they have now, unknown to anyone but each other… http://www.youtube.com/watch?v=HWMIwziGrAQ&feature=player_embedded

“Do you know the name “Larry Grathwohl”? You should. What he did and lived to tell was shocking, and shouldn’t be forgotten. Stick with me and read these words, and pass them along. Here are words about a man whose work and life merit your attention and that of your fellow Americans.

Larry Grathwohl was a distinguished Vietnam vet who in the 1960s contacted the FBI and offered his services in infiltrating Students for a Democratic Society (SDS) and Bill Ayers and Bernardine Dohrn’s Weather Underground. That was no small deal; it was extremely dangerous. It was a total self-sacrifice, a leap into hell on behalf of his country. He risked his life and endured some wretched things that most of us would refuse to do. For the good of his country, he became part of an ugly inner circle. He had to plunge into their dark side.

Grathwohl ultimately blew the whistle on Ayers and Dohrn and crew in sworn testimony in the 1970s and (further) in his 1976 book, Bringing Down America: An FBI Informer with the Weathermen, plus numerous times since. He testified before the Senate Judiciary Committee on October 18, 1974, where he spoke at length, and under oath, about his relationship with Ayers and Dohrn, including how Dohrn personally (in Grathwohl’s words) “had to plan, develop, and carry out the bombing of the [park] police station in San Francisco.” In that tragic action by the Weather Underground in February 1970, a young San Francisco police officer named Brian V. McConnell was killed.

“You Don’t Need A Weatherman To Know Which Way The Wind Blows” (Originally published in New Left Notes June 18, 1969)

“Remember Obama saying Domestic Terrorist, Weatherman Bill Ayers, was “just a guy in the neighborhood?” Even the most ardent Obama supporter can’t swallow that almost four years after his reign began. They might ignore it, but they know it’s a big “effing” deal, as the current Vice President of the United States might say. The following points to the incontrovertible truth that Obama’s 2012 campaign slogan “Forward,” is a Socialist, Marxist, Communist mantra used for at least, close to 100 years.”

John Murtagh speaks  in October 2008 about the attempted bombing of his home as a child by Bill Ayers’ terrorist group Weather Underground. His father was a judge and the bombing occurred while they were sleeping.

Bill Ayers’ recent appearance on Megyn Kelly’s Fox News program appears to be part of a systematic campaign to whitewash the activities of the communist terrorists who were murdering policemen and FBI agents during the 1960s and 70s, and to set the stage for their release and rehabilitation.

Kelly was unprepared for the interview and failed to consult prominent experts on the case, such as former FBI agent Max Noel. “I’m extremely disappointed, as are a number of us who actually worked the WUO [Weather Underground Organization] case on a daily basis, in your attempt to ‘confront him’ without availing yourself of the knowledge that those of us who actually worked the case could have given you,” Noel said in a message to Kelly. The former FBI agent, who arrested the UNABOMBER and has co-authored a sensational new book about that case, was a member of the Weatherman Task Force in San Francisco, where Ayers and his wife, Bernardine Dohrn, were operating.

Noel has sensational details about how the Weather Underground constructed its bombs in order to kill people, not just damage property. This information, if publicized on “The Kelly File,” would have exposed Ayers as the crazed and committed communist he truly is. As a result of this glaring omission, Ayers succeeded in coming across as simply an aging “anti-war activist” or “radical” who carried things a little too far with bombings that caused some property damage but killed no one.

This is as big a lie as Ayers’ claim made to Kelly that he didn’t know Barack Obama very well, even though he helped him launch his political career in Chicago. “I knew him as well as he knew 10,000 other people,” Ayers said. “Today, I wish I knew him much better and I wish he’d listen to me.”

Look at another one of Obama’s dear comrades: Mike Klonsky 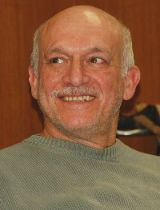 Klonsky was an associate of Weather Underground members. Klonsky formed a Maoist organization, first known as the October League, which ultimately became the Communist Party (Marxist Leninist).
Klonsky was CP(ML)’s chairman. He was so highly thought of by Mao’s regime that he was among the first Americans invited to visit Communist China.

Here’s what you need to know.  Klonsky is an unabashed communist whose current mission is to spread Marxist ideology in the American classroom.  Obama funded him to the tune of nearly $2 million.  Obama, moreover, gave Klonsky a broad platform to broadcast his ideas: a “social justice” blog on the official Obama campaign website.

Klonsky’s communist pedigree could not be clearer.  His father, Robert Klonsky, was an American communist who was convicted in the mid-Fifties for advocating the forcible overthrow of the United States government — a violation of the Smith Act, anti-communist legislation ultimately gutted by the Supreme Court.  In the Sixties, Klonsky the younger teamed with Ayers, Dohrn, Jones and other young radicals to form the Students for a Democratic Society.  It was out of the SDS that Ayers, Dohrn and Jones helped found the Weatherman terrorist group.

Klonsky took a different path, albeit one that led inexorably to a new partnership with Ayers, which Obama mightily helped underwrite. Upon splitting off from the SDS, Klonsky formed a Maoist organization, first known as the October League, which ultimately became the Communist Party (Marxist Leninist).

Luckily, Breitbart has a nice copy of the photo, showing Obama and his commie comrade Mike Kruglik, another Alinsky graduate from IAS…This website shows a cached view of how the BuildingOneAmerica.org site looked on July 19th, 2012 — with a photo of President Obama talking to Building One America’s President Mike Kruglik, which was taken during a 2011 meeting held at the White House. Kruglik’s official biography on the Building One America site describes him thusly: “He has been developing grass-roots citizens’ power organizations since 1973 with the Industrial Areas Foundation, the Gamaliel Foundation and Building One America.” It also says: “From 1984 to 1998, he was co-director of the Calumet Community Religious Conference, the community organization that recruited and hired Barack Obama as a community organizer. Mr. Kruglik’s role as Barack Obama’s mentor has been chronicled in a number of works of history and periodicals.”

As a freshman at Columbia University in 1970, future Attorney General Eric Holder participated in a five-day occupation of an abandoned Naval Reserve Officer Training Corps (ROTC) headquarters with a group of black students later described by the university’s Black Students’ Organization as “armed,” The Daily Caller has learned.

Department of Justice spokeswoman Tracy Schmaler has not responded to questions from The Daily Caller about whether Holder himself was armed — and if so, with what sort of weapon. Holder was then among the leaders of the Student Afro-American Society (SAAS), which demanded that the former ROTC office be renamed the “Malcolm X Lounge.” The change, the group insisted, was to be made “in honor of a man who recognized the importance of territory as a basis for nationhood.” Black radicals from the same group also occupied the office of Dean of Freshman Henry Coleman until their demands were met. Holder has publicly acknowledged being a part of that action.

The founding of the Greater Cleveland Congregations (GCC), a group that describes itself as “a non-partisan coalition of faith communities and partner organizations in Cuyahoga County working together to build power for social justice,” claims that its focus is uniting the masses to improve local neighborhoods.

What is the stage of the proletarian revolution?