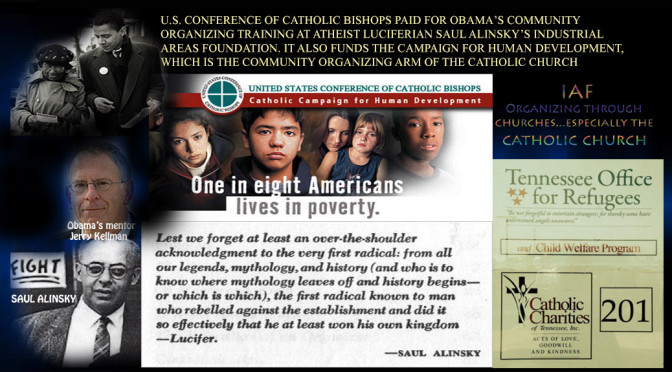 One has to wonder why any church organization would associate with known atheists and promoters who work to achieve exactly the opposite of what the Bible teaches. But if you take the time to research these organizations and individuals responsible for making  long term strategic moves reminiscent of a master chess player, the fog begins to clear. How many of us are aware that Communism is the weapon that the “Secret Powers” have been using to cause division and chaos in the world, INCLUDING The Church! Do you realize the religious beliefs of the founders of the United Nations is the worship of Lucifer, aka the Mystery School religion? Think they are helping the illegal immigrants invade America out of the goodness of their hearts? NO, there is subterfuge involved at the top of these organizations who are willing to take excerpts from the bible and use them out of context in order to convince Christians that they should allow the illegals to come in against the rule of law. All of the nonsensical political and religious agendas  of  those proclaiming to be “Christian” organizations will become quite “transparent.” This has been a long time coming and nothing is new under the sun. The “end game” is still in play so we need to get our rose-colored glasses off and share the information that we learn with others who may not realize that they are just being used like pawns in a chess match.

The creation of Communism by the Illuminati

“In 1829, the Illuminati held a meeting in New York which was addressed by a British Illuminist named Wright.Those in attendance were informed that the Illuminati intended to unite the Nihilist and Atheist groups with all other subversive organizations into an international organization to be known as Communism. pawnsinthegame. This destructive force was to be used to enable the Illuminati to foment future wars and revolutions. Clinton Roosevelt (a direct ancestor of F.D.R.) Horace Greeley, and Chas. Dana were appointed a committee to raise funds for this new venture. The fund they raised financed Karl Marx and Engels when they wrote “Das Capital” and “The Communist Manifesto” in Soho, England.

In 1830, Weishaupt died. He carried the deception that the Illuminati was dead to his own death-bed where, to convince his spiritual advisers, he pretended to repent and rejoin the Church.

According to Weishaupt’s revised version of the Age-Old conspiracy the Illuminati were to organize, finance, direct and control ALL international organizations and groups by working their agentur into executive positions at the top. Thus it was that while Karl Marx was writing the Communist Manifesto under direction of one group of Illuminists, Professor Karl Ritter of Frankfurt University was writing the antithesis under direction of another group, so that those who direct the conspiracy at the top could use the differences in these two ideologies to start dividing larger and larger numbers of the human race into opposing camps so they could be armed and then made to fight and destroy each other, together with their political and religious institutions.”

Words to live by…

“COMMUNISM IN THE CHURCHES” sermon
By Bishop Gerald Kennedy [c. 1960] “For the Lord spoke thus to me with his strong hand upon me, and warned me not to walk in the way of people saying, “ Do not call conspiracy all that this people call conspiracy, and do not fear what they fear, nor be in dread”.”
Isaiah 8:11-12

There has been a good deal of talk in these days about communist infiltration into the churches. I never paid much attention to it because I know the churches and it is obvious that they are the real bulwarks against this evil system. Besides, you will discover this talk has two main sources. First, it comes from religious racketeers who like all racketeers, prey on legitimate enterprises. Second, it comes from men who fear judgment and change and who believe it is 1860 instead of 1960. So I never paid it much mind.

It came to me that a more careful examination should be made and I am sorry to report that there are unmistakable signs of communist doctrines having captured the minds of some churchmen. It is much more subtle and dangerous than we have recognized and I feel it is my duty to speak a warning. For the people who have been making all the fuss about this issue, have missed the point. A friend of mine once remarked about a speech of mine: “The bishop hit the nail right on the head, but it was the wrong nail.” This is the perfect description of the activities of most of the brethren attacking churches.
http://www.wallbuilders.com/LIBissuesArticles.asp?id=138650

Evangelical Manifesto? The Marxists are IN THE CHURCH!

Evangelical “Manifesto” is code for Marxist. Who would ever put a word so associated with Communism in the same sentence as religion? A community organizer trained by Saul Alinsky, the infamous mentor of Obama and Hillary who dedicated his book “Rules for Radicals” to Lucifer. That is who… https://factsarestubbornthings.us/2014/06/27/evangelical-manifesto-commies-church/

In this video, the hidden agenda of the UN is clearly exposed. From its inception to its ultimate goal, the creation of a global religio-political system will have far-reaching consequences for every individual on Earth and possible catastrophic consequences for those who trust in salvation in Christ alone.

This presentation includes a look at Robert Mueller’s school and philosophy, and how the cosmic christ (Lucifer) and the United Nations go together.

The Unholy Alliance -Christianity & The NWO
Part I

The Bilderbergs.The Trilateral Commission.The Council of Foreign Relations.The Central Intelligence Agency. Most everyone has heard of these groups and some of the conspiracy theories surrounding them regarding the development of the ‘New World Order.’ Now imagine for a moment there is something to this (and there appears to be no lack of documented material justifying these theories). That would mean that at almost every elevated level of business and government, world wide, men and women have infiltrated, become the controlling administrators and are working to effectively control every aspect of the life of the “world citizen.” One aspect of this that has not been properly searched out is the “religious” connection. Surely, given that much of the world is religious, and in the currently reigning SuperPower nation of the U.S., predominantly “Christian,” then it would only make sense that these organizations have infiltrated the Church itself and are also actively leading it to into the New World Order as well. Do the worlds leading Christian evangelicals have ties to these organizations? Yes they do, and it is thoroughly documented.
http://rense.com/general20/unholy.htm

This supposed “one holy church,” this longed for world church, is a figment of a heretical imagination. The Bible does not tell us that there should be a world church. Quite the opposite. The Bible repeatedly warns that “Christendom” will become increasingly apostate as the time of Christ’s return draws near, and true Bible churches are commanded to remain separate from this wickedness. God is not fulfilling the Great Commission through a church, singular, but through churchES, plural      https://factsarestubbornthings.us/2014/06/20/evangelical-alliance-formed-belly-beast/

How Marxists Infiltrate the Catholic Church

There are many examples of the Catholic Church backing the “wrong horse” and accepting money from atheist Jew George Soros, the known puppetmaster of Obama and Hillary. Lay Catholics are rising in protest to money being used for works that would not pass the bible test! http://www.getresponse.com/archive/asinews/ASI-How-Marxists-Infiltrate-the-Catholic-Church-7874978.html

Defending the Catholic Campaign for Human Development…Alinskyian organizing is intrinsic to the CCHD.

After three years of intense scrutiny into problematic Catholic Campaign for Human Development (CCHD) grants, the American Life League and other concerned groups gave the beleaguered “charity” some space to reorganize.  CCHD’s 2013 collection came and went with hardly a peep from its critics and the next year of grants was announced unchallenged.
CCHD allies, however, have used the hiatus to argue against any reform or redirection.
One of those allies is Faith in Public Life.  In anticipation of the 2008 elections, Faith in Public Life was created by Soros-connected individuals[i] to be a media machine that could give a religious voice to progressive political positions.  To this end, progressive clergy from various “faith traditions” were brought together to deliver coordinated messages concerning the election – most critically, that voting for a president needed to be about more than his abortion record.  They were so successful that the organization continued to coordinate other campaigns, such as a push for universal health care regardless of any moral failures built into the new system.”

Obama, Alinksy and the Devil

When people ask me, “Why would Obama want to destroy America” — at least the America that most Conservatives know and love? It’s simple. Why wait for Hell, when you can create Hell on Earth?

We often hear of Liberals use of Alinsky’s Rules for Radicals, and people discuss Alinsky’s organizing abilities. What they omit is his underlying philosophy. Alinsky built his organizing model on a love of creating hell.

The Catholic Campaign for Human Development: Reform or Bust

“While the CCHD has certainly faced extensive criticism, it has also had many defenders. On the USCCB’s website for the CCHD, its mission is described as follows:

The Catholic Campaign for Human Development is the domestic anti-poverty, social justice program of the U.S.Catholic bishops. Its mission is to address the root causes of poverty in America through promotion and support of community-controlled, self-help organizations and through transformative education.

While this sounds ideal in theory, the CCHD’s mission has simply not been adhered to. In its 40-plus year history, the CCHD has funded many organizations and activities that are at best questionable and at worst downright reprehensible. Indeed, through the CCHD annual November collection, American Catholics have funded efforts promoting “reproductive justice”, (i.e., abortion) and “marriage equality” (gay “marriage”), among other causes.

Critics Call for Defunding the Catholic Campaign for Human Development

The CCHD is under heavy fire due to serious breaches of their funding guidelines. For many concerned Catholics, the only solution is to pull the plug.

The critical role of the Catholic Church in passing national health care reform legislation is coming under serious media scrutiny. But the story has taken a strange turn. It has now been revealed that George Soros, the billionaire hedge fund operator and well-known atheist, has been pouring hundreds of thousands of dollars into “progressive” Catholic groups that are significant players in the national debates over health care and immigration.

On the surface, it would appear that Soros would be opposed to many positions of the Catholic Church. A major financial backer of the ACLU, Soros supports such causes as drug legalization, the rights of “sex workers” and felons, euthanasia, radical feminism, abortion rights, and homosexual rights. He does all of this in the name of promoting an “open society.”

But a review of the records of his Open Society Institute finds that a group calling itself Catholics in Alliance for the Common Good (CACG) has received $200,000 from them over the last several years.

3 thoughts on “The Luciferian “Long Range Plan” of Communism: Use Faith-Based Community Organizers in Church to Infiltrate & Control”