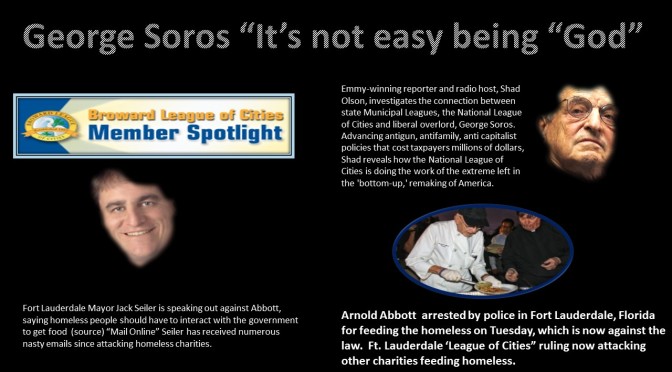 Fascism is a form of government, in which the country is considered more important than any one person, group, liberty, or provision. A country under this kind of government is usually run by a person called a leader, who has the right of total control over the government and people.  Fascist leadership might also be similar to an oligarchy, such as in Italy where the fascist party was ruled by its “grand council” from 1922 until the end of World War Two.

The official behind the recently passed ordinance is Mayor Jack Seiler sworn in as Mayor of the City of Fort Lauderdale on March 17, 2009.  Seiler member of Ft. Lauderdale’s “League of Cities” reported having received numerous nasty emails flooding his inbox since recent attacks on homeless shelters.        Mail Online quoted

Mayor Seiler “….. homeless people should have to interact with the government to get food”

“The Main Obstacle To A Stable And Just World Order Is The United States.” ~ George Soros

In this video link Emmy-winning reporter and radio host, Shad Olson, investigates the connection between state “Municipal Leagues“, the “National League of Cities” and liberal overlord, George Soros. Advancing antigun, antifamily, anticapitalist policies that cost taxpayers millions of dollars, Shad reveals how the National League of Cities is doing the work of the extreme left in the ‘bottom-up,’ remaking of America.  Jordan Mason city councilman in Rapid Cities S.D. fought during in depth investigation into “League of Cities” groups and “Municipal League” the name “George Soros” repeatedly turned up throughout investigation.

George Soros boasts of being philanthropist.  However according to wikipedia philanthropy is one who donates his or her time to  charitable causes.  Which leaves a wide scope for goals,motives, private and self interests and to whom is benefiting.

George Soros has funded both Democrat and bi-partisan candidates like John Kerry, Hillary Clinton, Ron Paul and  Barack Obama.  Soros support of political candidates is bi-partisan even though Soros funded group “MoveOn”  boasted having bought Democrat Party in 2004.    Soros attacked George W. Bush during both campaigns and stated “George Bush was a danger to the world”.  Question must be asked “Is Soros oligarchy dictatorship any better?  Loyalty oaths to political parties for election apparently have  superseded  constitutional oaths and obligations to constituents. It is noted Soros investments into Bush #41 created private investment group Carlye Group created massive returns for Soros during Gulf Wars.    It has been reported by many news sources Soros confessed “Messianic god Complex” as well as his mental view of feelings  he’s actually “GOD”!!  As bizarre as this may sound it is typical mindset and teachings of Kabballa.

The teachings of New Age Movement promoted by Lucis Trust and Kabballah Babylonian  Zohar teachings coincide with mindset of George Soros.     Mystic religious cults are found both in Judaism’s Rabbinical “Oral” Laws and Islamic “Sufism”.  The strange “push” for r “Zoroastrianism” practiced in Ancient Babylon in modern day Iran.  sheds light on John Robinson’s 1798 book “Proof’s of a Conspiracy” to create One World Government and One World Religion. Link

“The Masters” in both New Age Movement, Lucis Trust and other sects intertwine are actually “Fallen Angels” and demons “channeled” by means of “magic spells” and rituals.

You may be wondering what does “homeless charity” and religion have in common.  That depends if you understand history of power of “Established Religions” , “Divine Right’s of King’s” up to Revolutionary War.  If one studies history it was “Secret Doctrine” or forbidden secret knowledge when shared and passed on to select few resulted in feudal systems of power.    Most of Rome’s dictators declared themselves “gods”  Seems the Global Community have taken over “charities” and Israel recently joined global “Red Cross” only upon adapting emblem  to “square” or “crystal” rather than “Cross”.   Islamic “Rose Sufi Crescent” charity symbol “the crescent moon” and advocates entering “an oath of protection”.