The  Rockefeller Foundation created the National Education Association in order to brainwash the schoolchildren of America over a course of generations. One of their greatest accomplishments was the lesson plan that Franklin Delano Roosevelt saved this country with his New Deal program. How many know the history of the Delano family and its ties to Communism Manifesto or the Illuminati bloodlines? By controlling the education of children, the elite oligarchy has produced the dumbed down electorate that we see today.  Communism is the stated goal of the oligarchs, disguised as Democracy by the Democratic Party.

“One of the great myths of the 20th – and now 21st – century is the belief that the American Civil Liberties Union was an organization that had a noble beginning, but somehow strayed off course.

That myth is untrue. The ACLU set a course to destroy America – her freedom and her values – right from the start.

From its very beginning, the ACLU had strong socialist and communist ties. As early as 1931, the U.S. Congress was alarmed by the ACLU’s devotion to communism. A report by the Special House Committee to Investigate Communist Activities stated

The American Civil Liberties Union is closely affiliated with the communist movement in the United States, and fully 90 percent of its efforts are on behalf of communists who have come into conflict with the law. It claims to stand for free speech, free press and free assembly, but it is quite apparent that the main function of the ACLU is an attempt to protect the communists.

Roger Baldwin and Crystal Eastman founded the ACLU in 1920 along with three other organizations dedicated to the most leftist of causes. The histories of these two individuals belie their claims of patriotism and respect for the Constitution. 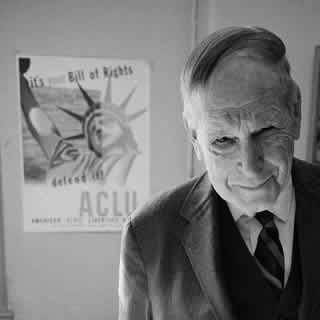 ROGER NASH BALDWIN, founder of the ACLU, who in 1935 stated” …Communism is the goal.” Background information on Baldwin from Discover The Networks.

FDR must have been a Communist. Consider what FDR told Rep. Martin Dies in 1940:

I do not regard the Communists as any present or future threat to our country, in fact I look upon Russia as our strongest ally in the years to come. As I told you when you began your investigation, you should confine yourself to Nazis and Fascists. While I do not believe in Communism, Russia is far better off and the world is safer with Russia under Communism than under the Czars. Stalin is a great leader, and although I deplore some of his methods, it is the only way he can safeguard his government.

His protestation of a lack of belief in Communism is completely belied by his words here and in many, many ways by his actions.

BALDWIN AND ELEANOR ROOSEVELT
“Baldwin joined the American Union Against Militarism (A.U.A.M), an anti-war organization located in New York, at a time when Congress was punishing dissenters for exercising their rights to question or oppose the government’s wartime policies. This restriction on free speech enraged Baldwin and his A.U.A.M. allies, who were working to become more organized and unified. Baldwin applied for Conscientious Objector status but his application was denied, and he was sentenced to one year in prison for refusing to enlist. The FBI was responsible for Baldwin’s arrest, and before incarcerating him they asked him to organize the Bureau’s civil liberties files, which were in disarray. This gave Baldwin a chance to charm the Bureau and while he still was required to carry out his prison sentence, the FBI later gave him a Christmas gift with the engraving, “To the only criminal we have ever loved.”

After his release from prison, Baldwin brought together an extraordinary group of individuals – Albert DeSiver, Walter Nelles, Crystal Eastman, Clarence Darrow, Norman Thomas, Helen Keller, Jane Adams, Oscar Garrison Villard, and Felix Frankfurter – with whom he founded the American Civil Liberties Union. This organization, dedicated to protecting the freedoms granted to American citizens by the Bill of Rights and Constitution, brought litigation against local, state and federal agencies in order to test the constitutionality of laws that seemed to restrict a citizen’s civil liberties. According to Jerome J. Shestack, Baldwin “defended just about everybody – brown shirts and reds, hard hats and eggheads, rabble-rousers and nudists, free-thinkers and conservatives, books from Uncle Tom’s Cabin to Ulysses, and pamphleteers galore. No current expediency, no popular tide ever made him cower or diverted him from the defense of liberties.” When questioned about the fact that his “clients” were of all political persuasions and backgrounds, Baldwin responded, “I always felt from the beginning that you had to defend people you dislike and feared as well as those you admired.”

ACLU: ‘Communism is the Goal’

“There is perhaps no greater example of ironic doublespeak than inclusion of the phrase “civil liberties” within the inapt designation: “American Civil Liberties Union.”

Indeed, few leftist organizations in existence today can compete with the ACLU in terms of demonstrated hostility toward what the Declaration of Independence describes as “certain unalienable rights” with which Americans are “endowed by their Creator.”

Consider the doublespeak inherent throughout the “progressive” Goliath’s flowery self-representation:

The ACLU is our nation’s guardian of liberty, working daily in courts, legislatures and communities to defend and preserve the individual rights and liberties that the Constitution and laws of the United States guarantee everyone in this country.

I am for socialism, disarmament, and, ultimately, for abolishing the state itself… I seek the social ownership of property, the abolition of the propertied class, and the sole control of those who produce wealth. Communism is the goal.

Ironic, isn’t it? So much for “life, liberty and the pursuit of happiness.” By combining straightforward segments from each ACLU rendering we arrive with an accurate portrayal. One that cuts through the doublespeak:

The ACLU is…working daily in courts, legislatures and communities. Communism is the goal.

In 1931, just eleven years after the ACLU’s inception, the US Congress convened a Special House Committee to Investigate Communist Activities. On the ACLU it reported:

The American Civil Liberties Union is closely affiliated with the communist movement in the United States, and fully 90 percent of its efforts are on behalf of communists who have come into conflict with the law. It claims to stand for free speech, free press and free assembly, but it is quite apparent that the main function of the ACLU is an attempt to protect the communists.

To be sure, the “main function of the ACLU” is entirely counter-constitutional.

A shared objective between both Communism generally, and the ACLU specifically is the suppression of religious liberty; principally, the free exercise of Christianity.

Karl Marx, high priest of the ACLU’s beloved cult of Communism, once said: “The first requisite for the happiness of the people is the abolition of religion.”

“The American Civil Liberties Union’s primary work is litigation, but this month it’s moonlighting as a wedding planner as part of its role in the campaign to legalize same-sex marriage nationwide.”

KARL MARX BORROWED HEAVILY FROM CLINTON ROOSEVELT’S BOOK, AN INCREDIBLE CONNECTION AS HE IS A DIRECT ANCESTOR OF FRANKLIN DELANO ROOSEVELT…It’s a blueprint for the Communist Manifest and the New Deal.

U.S. Statutes at Large, Public
Law 637, Chp. 886, p. 775-780
AN ACT
To outlaw the Communist Party, to prohibit members of Communist organizations from serving incertain representative capacities, and for other purposes. Be it enacted by the Senate and House of Representatives of the United States of America in Congress assembled, That this Act may be cited as the ”Communist Control Act of 1954”.
Findings of Fact
Sec. 2. The Congress hereby finds and declares that the Communist
Party of the United States,although purportedly a political party, is in fact an  instrumentality of a conspiracy to overthrow the
Government of the United States. It constitutes an authoritarian dictatorship within a republic, demanding for itself the rights and privileges accorded to political parties, but denying to all others
the liberties guaranteed by the Constitution.