With Constitutional liberties threatened are there Fifth Column movements within government?

With calculated, methodical assaults against our judicial and constitutional system increasing; is it time American’s should know the truth?   What is America’s (identity) as a nation?

Is America’s  history of Puritans and Pilgrims  and national identity even taught in schools anymore?  Our Constitution was created and patterned after same government philosophy as “Mayflower Compact”.   Sir William Blackstone created (LONANG) Laws of Nature and Nature’s God at one time commonly known as “Law of England”.   After King John’s “Magna Charter” England went to a gradual moral decline between powers of ruling families.  From Mary Tudor (Bloody Mary) efforts to bring back established religion of “Holy Roman Empire” up to King James who created term “Divine Right’s of King’s” religious freedom was declining rapidly in Europe.    British “Pilgrim” Sue Allen tells history of Christian persecution during this time period.

John Locke considered “Father of Enlightenment Period” was among those fleeing England to Holland avoiding religious persecution.   John Locke wrote many books among the most famous was “Second Treatise of Government” which Thomas Jefferson used as “blueprint” for Declaration of Independence. 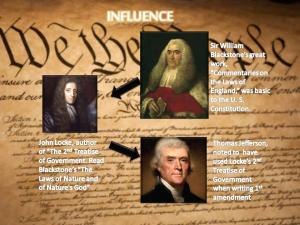 The Holy Experiment” to establish a “Moral-Self-Governing” Society. The  Bible being the ultimate source of morality for Christians they wrote  biblical Laws into the Common Law to establish morality. In terms of  Religion that was “Free Will” and choice to ensure that even  Christianity would not become an “Established Religion”. This nation  was not established upon ANY established religion. There is bi-partisan effort dueling  for control in America.  Education Day served its  purpose brainwashing America into the “great falling away”.   The minute we place an Established Religion in place of our  Constitution that’s when we enter “The Dark Ages” according to Daniel Webster.

“Providence has given our people the choice of their rulers,
and it is the duty, as well as privilege and interest,
of a Christian nation to select and prefer Christians for their rulers.”

Our Founding Father’s wrote Blackstone’s laws (biblical laws) into Common Law to ensure “morality” but leaving actual religious belief up to conscience and free will.   Preventing the religious tyranny of England they created “Establishment Clause” in First Amendment. Being well educated and carefully analyzing previous governments throughout history understanding no civilization survived “moral decay”.  Constitutional debates lasted from May 25 to September 17, 1787  This point was crucial creating a “Self-Governing” Republic.  Our Constitution’s Tenth Amendment and Article 4 Sec. 4 the “guarantee clause”.  Understanding the private ambitions of men our Founding Father’s patterned 2nd Amendment after the first Law of Nature (irrevocable right to life and self-defense) to protect rights granted only by “The Creator”.   While the revisionists, humanists and atheists deny this the stubborn facts are here if we only open our minds to truth.

“We hold it for a fundamental and undeniable truth “that religion, or the duty which we owe our Creator, and the manner of discharging it, can be directed only by reason and conviction, not by force or violence.”  The religion, then, of every man must be left to the conviction and  conscience of every man: and that it is the right of every man to  exercise it as these may dictate”. James Madison, A Memorial and  Remonstrance Against Religious Assessments, addressed to the Virginia  General Assembly, June 20, 1785

The Founding Father’s created a system of three branches of government to ensure separation of powers while republic and people were giving the mass of power.  This was never attempted before even in previous republic’s like Rome with only a senate.